President Paul Kagame was inaugurated into his third term as Rwandan president on August 18, 2017, just three days before I landed in Kigali. As an American raised in Hong Kong, my initial reaction upon learning that the president was elected with 98.63 percent of the vote was to suspect corruption. Furthermore, neither of the two opposition candidates amassed even a single percentage point of the vote. This suspicion of corruption was compounded by the U.S. State Department’s statement condemning the “irregularities observed during voting,” and knowledge that the Rwandan constitution was amended in 2015 to allow President Kagame to stay in power until 2034. Coincidentally, 98 percent of voters had also agreed with this constitutional revision.

Western media is constantly critical of President Kagame. They regularly write of a silenced political opposition and the suppression of domestic journalists. The leader is often likened to an African Putin, with Rwanda’s great economic success even mirroring Russia’s initial boom. With the elections so recently completed, they were a hot topic of conversation, especially among us American students. During our second lunch of orientation, I asked one of my directors: “So what do you think of President Kagame? As in really think?” He did not bat an eye before breaking down why he adored his leader. Personally affected by the genocide, he saw President Kagame as the foremost unifying force for the country. He eloquently explained how the president’s leadership brought Rwanda out of total desolation and heralded great strides forward in terms of social cohesion, development, and future planning. According to him, nearly everyone domestically agrees President Kagame is the man Rwanda needs most right now. Therefore, the definitive election results were neither surprising nor to be questioned. I looked across the table and saw two stickers of President Kagame on the back of my director's phone. “Well, my sample pool of one is extremely skewed,” I thought to myself. I vowed to ask others the same question so as to gather more diverse thoughts.

It has now been three weeks, and I have yet to find a dissenting view of the country’s leader. A woman from the Courage of Living association—members of which consist of genocide survivors, wives of perpetrators, and even perpetrators themselves—said: “Everyone has learned a lesson through what happened. No matter your background… you have gained nothing. We are lucky to have good leadership to lead us through this.” Reagan, a rescuer during the conflict, said: “Kagame uses his power to see every way of controlling and stopping [violence] before it happens.” One of my classmate’s host family even prays to President Kagame every night. When it comes down to it, the general population appears to value one thing above all else: strong leadership. Rwanda implemented a multi-party system in 1990—four years prior to the genocide—which led to the polarization of extremist groups and played a part in inciting the genocide. While today a multiparty system still technically exists, it is not what people the people seem to be looking for. Instead, they uphold their strongman president who has proven capable of balancing ethnic tensions and creating a common Rwandan identity. Voices looking to stir up conflict or prompt opposition are not welcomed.

Although the population adores its commander-in-chief, one question still remains: what comes after President Kagame? The president has repeatedly affirmed that this will be his last term. During his second period in office, President Kagame said it was not his responsibility to choose his successor. This raised hopes that democratic elections would ensue. However, now that he is back for a third time, there has been a change of tune. Journalist John Carlin wrote in an article that President Kagame said “he has now asked [his party] to 'do their homework' again and find [a successor] in time for the end of his new presidential term in 2024.” The upcoming transfer of power—if it occurs—will set the standard for Rwanda’s future elections. President Kagame’s future involvement in politics will determine if he is the authoritarian dictator the West claims or the exemplary leader that his country reveres. 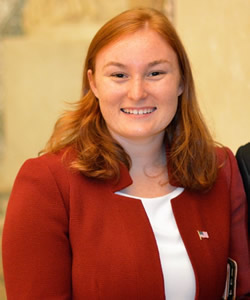 Brittany Fried (SFS'19) majored in regional comparative studies with a focus on post-conflict education in Asia and Africa. She additionally pursued a certificate in genocide studies through the Center for Jewish Civilization and a minor in Chinese. During the fall 2017 semester, she studied abroad in Rwanda, doing research on post-genocide peace and history education, and blogged as a part of the center's Junior Year Abroad Network. She was also a summer 2018 Education and Social Justice project fellow in Zambia.