The Importance of Giving

I have been extremely fortunate to fall into a group of friends in my neighborhood known as the "acoustic guys." Most of them are in a band called Under the Acoustic Tree, named after an actual tree where we hang out, play guitar, and drink tea every day. Every other weekend, they host a fish grillout on the beach for anyone who wants to come. After the sun sets over the ocean, the grilling begins on one side of the circle accompanied by pop music and dancing. On the other side, a few meters away, people sit on the sand, play guitar and drums, and hang out.

This is where I sat last weekend, with a couple of others getting deep into life philosophies and the big questions, all in French. This made me really excited about my French skills but also prompted a lot of, "Do you understand?" and, "Do you see what I'm saying?" It took me a while to realize that my friend wasn't concerned that I was catching all the words he was saying, but was making sure I got his message: the importance of giving. When you break down life, love, friendships, or work, it comes down to giving. And giving comes in a variety of forms. When someone makes tea at the tree, or plays guitar at the grillout and joyous singing and dancing follows, they have given us our smiles. When you spend time with someone, listen, and talk to them, you are giving. In love, and in life, the point is to give everything you've got.

A few days later, I introduced myself to a Senegalese friend as Mame Diarra Bousso. My host family gave me this name during my first week, after the mother of one of the most revered marabouts in Senegalese Islam, and I went with it. After that introduction, my new friend invited me to a festival-pilgrimage celebration in her honor and gave me the chance to volunteer in the medical tent, dispensing different medicines and vitamins with the volunteer doctor. It seemed like a cool opportunity, and it was in honor of Mame Diarra Bousso, so I didn’t hesitate to cut my spring break plans short and leave my tranquil hotel in the Gambia for this rural, exhausting, but completely worthwhile adventure.

Little did I know that I was entering a new culture which I now affectionately summarize as the "hippies of Senegalese Islam."

Amadou Bamba, son of Mame Diarra Bousso, was the founder of the Mouride brotherhood, a large Islamic Sufi order in Senegal. Bamba’s most prominent disciple, Sheikh Ibrahima Fall, devoted himself to Bamba, allowing the Mouride movement to grow and adding his own touch with the "culture of work" he emphasized. Ibrahima Fall gained a huge following known as the Bayefall community, prevalent at these pilgrimages, that has developed a peculiar culture. Bayefalls have a distinct style, wearing crazy outfits and colors, accessories, and dreadlocks. They have a unique greeting where they shake hands and then place the back of the other person's hand to their forehead. They are often artists, but many work as teachers, doctors, or with NGOs. Most importantly, they value generosity above everything else.

I tried to understand this culture and make sense of the festival with its off-key singing, drumming, and dancing from sunset to sunrise. Everyone asked me excitedly if I was Yayefall (a female Bayefall), and seemed to expect that I would say "yes." I explained that I still didn’t really know much about what that meant, so I couldn’t answer. I didn’t know anything that the sheikhs to whom I was supposed to be dedicating myself had said, and I wasn’t Muslim, which I thought was important. However, I saw lines blurred when I learned that Bayefalls don’t pray five times a day because their dedication to God is present at every moment of their day, and they often replace fasting during Ramadan with hard labor and preparing meals for those that do fast. Their explanations about what would make me a Yayefall always started with being generous and having a good heart, and beliefs came last.

Since then, I’ve attended one other festival and have plans for two more this semester, so they’re probably considering me a Yayefall already in terms of their "good person" definition. I’m not sure about that, but I know that whether it’s in the company of the acoustic family or the hippies of Senegalese Islam, I’m learning and appreciating one of the most central aspects of Senegalese culture: the importance of giving. 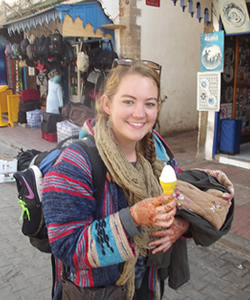