Interfaith: The Meeting Place of the Personal and the Political

I close my eyes and find a sea of black. Sounds and images swirl around me as I reach for a starting point. “Religions are like languages. God speaks to each of us in a unique way.” The words of an old friend echo throughout my mind, piercing through a cacophony memories. Two things hold me hostage as I turn over in my mind the concept of interfaith activism: my still-unfolding multiplex identity as a mixed black and white Jewish woman exploring Islam and queer theory—and that’s only half of it—and what can only be described as jarringly incomplete faith-based community work.

In a class I took on Sufism last semester, the professor led us through many philosophers and writings. A continuous theme that stuck with me was that of veils. She told us that throughout the Qur’an and hadith, mention of God being veiled was taken to mean that which covered our experience of God protected us from the blinding light that is God in his pure form. Coverings I could think of were that of region, culture, personality, circumstance, and even religion itself. The most clear dichotomy she gave us was that of tariqah and sharia. Tariqah is the winding path, the part of one’s faith that is living, changing, inspiring, and even perilous at times. Sharia is the straight path: the part of one’s faith that is law and discipline. Sharia gives the individual a sense of grounding and community. Out of this I took that there is mutual importance of one for the other; religions really can be thought of simply as veils or languages. But the analogy I believe does not stop here.

Through iterations such as these we see a natural connection and in fact tension between the spiritual and physical, between faith and justice, between the symbolic and the pragmatic. Understanding religion in this way made me feel more at home in the world as a person who comes from multiple faiths, races, and locations. Furthermore, this understanding has allowed me to realize that even if a person’s words sound different at first, underneath is the same life-giving essence that can be easily translated when we spend time with it. The analogy grows from here into community.  If we can understand each other and know that the same essence is behind each of our very lives, then solidarity between movements becomes simple. There is no longer “your” problem and “my” problem, but our problems. This is not to be mistaken with throwing away the need for representation or saying that anyone can speak for anybody, but rather the opposite: that we must increase our commitment to giving center-stage the voices that are cornered into society’s margins. We must expand each of our own capacities to be aware of who we are and where we come from in order to authentically uplift and realize this work.

In my experience, the roadblocks to realizing the potential of interfaith activism have been manifold. There are times when the word "frustrating" does not even begin to describe how off the work being done is. However, it has been a huge learning experience as to what interfaith organizing should look like. My introduction to interfaith has come through Muslim-Jewish partnership efforts and Palestine organizing in the DMV area. Three major roadblocks stand out in my mind. I’d like to use the language of one of the articles we were asked to read, “On Discovering and Re-Imagining Interfaith.”

Interfaith is political. Interfaith work can never be about feeling good and then going home. This is something I have seen both on and off campus, be it at dialogues, dinners, or group activities. We gather together because of conflicts that are inherently political; thus the outcome should do something to address that. To believe or to gather under the assumption that interpersonal issues are the root causes of systemic injustice whether in Palestine or the United States is not only wrong but a waste of time. Part of the beauty of being human is the ease with which friendships are forged, and media reflects this back to us with countless stories of relationships built across race, nationality, and faith. What requires a bit more planning and tact is building the momentum and strategies with which we can alter, deconstruct, and create anew the institutions whose actions create unequitable societies and toxic dynamics between communities.

Interfaith is a long game. Because interfaith is political, interfaith is also a long game. If we want to speak of interfaith organizing we have to acknowledge that 1) it has always been happening since the world has had spirituality, and that 2) it will always continue whether branded as such or not. Interfaith spaces should be a place where the unique needs of each community are expressed, present socioeconomic realities are acknowledged, and preexisting work within each community for X goals are highlighted. In this way, we are able to identify as a group what is wrong with the status quo and what is supporting it. We can also be uplifted by turning our attention to existing work to combat the status quo. We can direct our energy, money, and/or skills into this work. In a space where deconstruction and creation are simultaneously occurring, it makes it easier to see the gaps in our current understanding. From these gaps, we can come up with creative possible solutions.

Interfaith work I have seen, in the short time I have been involved, has been used as an excuse for white Jewish folk to ask ignorant questions of brown Muslim folk, and forget there being any inclusion of black Muslims or Jews of color. It has been power-blind in that it assumes, so well-illustrated in the case of what’s happening in Palestine, that all we need for peace is to encounter one another, eat together, talk, sing, or cry. To rage against such calls can be easily painted as waging war against happiness. However, what is being asked for is a greater commitment to taking concrete steps toward justice. A friend and colleague in the DC Palestine organizing community, Taher Herzallah, put it well saying that accountable interfaith work looks like “not just feed[ing] the homeless but figur[ing] out how to end the systems that created the homelessness in the first place.” 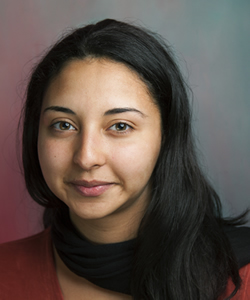 Olivia Vita is an undergraduate student in the College, class of 2019, majoring in cultural anthropology with a focus on identity, race formation, and religion. Vita has done advocacy and organizing work with American Muslims for Palestine and Jewish Voice for Peace both in the university setting and in the local community. Before transferring to Georgetown, she formed a pro-Boycott, Divest, Sanctions Muslim-Jewish Alliance at George Mason University with the intention of centering marginalized voices within both communities, openly unpacking the current divides between American Jews and Muslims, and addressing Islamophobia, anti-Semitism, and anti-blackness. Olivia is a singer-songwriter and enjoys eating good food with friends and family. At the Berkley Center, Vita is a student fellow in the 2017-2018 Doyle Undergraduate Fellows program focused on faith-based activism in the Washington, D.C. metro area.