Interfaith events are often predictable. An emphasis on our similarities, our common humanity, comes first. A call for respect of our differences follows. The narratives repeat familiar patterns. However, a recent interfaith event I attended snapped me out of the lulling rhythm of ecumenical lullabies. This event was unusual on multiple accounts. The subject matter controversial, the speakers non-expert, and the impact phenomenal.

Many faith traditions still struggle to articulate positions on the evolving realm of nontraditional sexual identities. Experts in religious traditions speak of the topic in terms of theological concepts and abstractions which displace the lived experiences of people who experience same-sex attractions. Historical marginalization from religious spaces has left many in the LGBTQ community isolated from religion. In short, LGBTQ politics is not an obvious choice for interfaith dialogue. In spite of, or rather because of, these obstacles, “The Truth We Can Tell: LGBTQ and Interfaith Conversation” was a master class in why interfaith dialogue matters.

The atypical structure of the event accounted for its genius. Instead of inviting religious leaders to pontificate on what their faith traditions say about the issue, the organizers invited six Georgetown students to speak. Each is from a different faith tradition, and each experiences same-sex attractions. Instead of trying to articulate their philosophy on reconciling their desires with their faith, they told the packed audience their personal stories. What role faith plays in their life, when they first realized that they had same-sex attractions, and how they have been working on understanding themselves. No attempt was made to combine the personal stories into a unified narrative. No patterns or lessons were teased out at the end. No agenda was shoved down the throats of the audience. The stories stood alone: naked monuments that forced everyone to see their truths.

The genius of this interfaith event was that it took the opposite approach of what an interfaith event is supposed to be. There was no call to unity, only an unmasking of difference. The abstract and theoretical was thrown out of the window, leaving only the concrete and personal. Answers were not given. In fact, no attempt was made to hoist up a solution. Instead, the audience members learned where these students were coming from. We learned how faith deeply touched them. We learned how they struggled to find the right balance. We learned how they wished to be defined not on how they felt, but by who they are. Instead of painting a picture for us, the students held up a mirror. We saw ourselves in them. That was the genius of this event, and that is how interfaith dialogue moves forward. 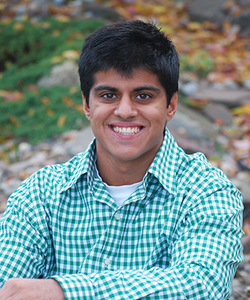 Baasit Bhutta is an undergraduate student in the College, class of 2018, majoring in political economy and minoring in both Islam and Muslim-Christian understanding and business administration. He is interested in how religion is used to organize institutions, especially focusing on applications of Islam. Baasit has conducted research in religious studies through Georgetown's Figge Fellowship and currently works as a research assistant in the Prince Alaweed Bin-Talal Center for Muslim Christian Understanding. In his spare time, Baasit enjoys reading and spending time with friends. At the Berkley Center, Baasit is a student fellow in the 2017-2018 Doyle Undergraduate Fellows program and blogs about faith-based civil interest groups in Washington, D.C.