Background: As part of the Religion, Conflict, and Peacebuilding Fellowship, Consuelo Amat interviewed Ambassador Ochieng Adala, Executive Director of Africa Peace Forum in Nairobi, Kenya. Ambassador Adala is a career diplomat who joined the Kenya Foreign Service in April 1964. He was Kenya’s ambassador to Zambia and the Southern African States, and to Egypt and the Northern African States. Adala was also permanent representative of Kenya to the UN in New York before retiring from the Foreign Service, at which point he joined Africa Peace Forum. He holds a B.A. in political science and a post-graduate diploma in International Relations. In the interview, Adala discusses his trajectory in the Foreign Service, in business investments, and at Africa Peace Forum. He also weighs in on the constitutional referendum debate over the Kadhis courts.

Ambassador Adala, could you share with me your trajectory as an ambassador, representing Kenya in various African countries and at the United Nations? What brought you to this kind of work?

As a young and idealist diplomat I was forced to grapple with very difficult peace and security issues in Africa, such as the multilateral decolonization process of Kenya, Zimbabwe, and Apartheid South Africa. It was a very interesting time for many reasons, not least because of the implications of the Cold War in Africa. There was a stalemate, for instance, in the United Nations Security Council on the issue of Apartheid South Africa because China and the Soviet Union benefited from the status quo. It was also a very frustrating time because other—very skilled—diplomats could “play with our minds” and basically make us believe that we were wrong while we had come to the table thinking otherwise.

I was in the UN during the breakup of Yugoslavia and this crisis made very clear that middle powers and developing countries did not have much to do with the important decisions. We became skeptical of whenever the West talked about human rights, accountability and governance, especially in Africa. The Soviet Union and the U.S. during the Cold War sided with countries based on everything but the African countries’ record of corruption, human rights violations and poor governance. This was very unfortunate because it perpetuated our problems and made our work impossible. The Cold War ended more than 10 years ago and the UN Security Council still reflects the post-World War II balance of power—clearly we need to reform it. The Council needs to be enlarged, but more importantly, the veto power has to go (which is very unlikely.)

Did you join Africa Peace Forum after you retired from the Foreign Service in 1994?

Before joining Africa Peace Forum I went through many failed attempts to open businesses. First I tried to get into the fish industry, then a loan company and finally in a UNCHR air transportation business. After I gave up trying to open my own business, Bethuel Kiplagat, founder of Africa Peace Forum (APFO) and current chairman of the Truth, Justice and Reconciliation Commission, got in touch with me to get involved in APFO and jumpstart the Track II Diplomacy project. Several luminaries joined the group and in 2003 I started heading the Small Arms and Light Weapons (SALW) campaign. This new initiative coincided with the Nairobi Declaration and Protocol on SALW, which today has thirteen members and nine have ratified.

The work of Africa Peace Forum is possible thanks to the support of the European Civil Society, especially Scandinavian countries. We have also come a long way as a country, as now the government works with NGOs and we are not in danger of being incarcerated for working on these issues. In the '70s and '80s you could be picked up by the police on the street for talking about peace and security. I am still in favor of channeling money to civil society in African countries because our governments are too corrupt, but there are many who disagree with me now. The EU is changing its approach to funding and is focusing more on government institutions and to devote a lot to accountability and tracking of funds. This change in strategy from the part of donors is why Africa Peace Forum struggles financially today. We try to avoid being perceived as an alternative to the government or as an opponent of the establishment— rather, we are enriching Kenyan civil society as partners of the government.

How do Kenyan NGOs and civil society move forward in this different context?

I am a firm believer in that change comes from within. Of course others can lend a hand and we have been appreciative of those who have given so far, but it is ultimately up to the people of this country to change the country. We are the only ones who can liberate ourselves. One of the dangers of foreign generosity is that we become complacent and forget that freedom and justice are not a given. The moral responsibility of our leaders is lacking, and this will continue being the case until citizens rise above their lethargy.

I think we are on track and the proposed constitution is a step in the right direction. The referendum is about the people and the constitution will pass because ordinary people think it is better for them. We also need better leadership to represent us abroad, especially in the United Nations. Kenya is no longer in the 1950s and good leadership could help advance our position internationally. There is a need for better leadership domestically too, and the bitter debate around the constitutional referendum sheds light on this. The Kadhis courts have been part of Kenya for generations, but somehow they are now controversial. The fact that the proposed document allocates public funds to these courts should not be reason to oppose a matter of minority rights. The fact is that Kenya’s entire legal system is Judeo-Christian and Muslims in this country are bound by it (Kadhis courts do not deal with criminal matters, are voluntary and they are subject to Kenyan courts.) This is a struggle for the common citizen in this country and we cannot rely on our politicians or the media to be truthful. 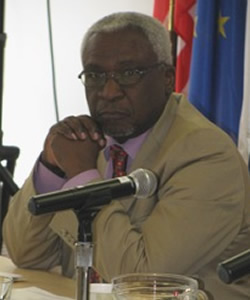