Pacem in Terris and a World Free of Nuclear Weapons

Pacem in Terris, the 1963 encyclical of Pope John XXIII, argued that there is a need for disarmament and that nuclear weapons must be banned. Pope Pius XII claimed that “the calamity of a world war, with the economic and social ruin and the moral excesses and dissolution that accompany it, must not on any account be permitted to engulf the human race for a third time.” This was the first time the Vatican had officially addressed not only Roman Catholics, but all of goodwill in the whole world.

Pope Francis said in the address that a certain pessimism might make us think that the very theme of the conference can appear increasingly remote. With instability and conflict around the world, is it not true nuclear weapons have in fact staved off another world war?

The signs of our times are complex indeed. To suggest that any one thing over another is strictly better is often a fruitless act. Some measure of flexibility is needed in these circumstances, and cooperative dialogue must be our goal. Pacem in Terris made it clear that “men [in those days were] more and more convinced that any disputes which arise between nations must be resolved by negotiation and agreement, and not be recourse to arms.”

Pope Francis’ historic proclamation was made in the midst of rising tensions in our own day–whether by way of North Korea, Iran, Pakistan, or Russia–all of which were brought up frequently throughout the conference. Plausibility of any one scenario is hardly the point; instead it is safe to say it seemed to many of the participants that the very idea of nuclear war or catastrophe is once again tangible, as it was not so long ago. We need to make sure that these nations and their leaders are brought to international dialogue, to further establish the fact that the usage of nuclear weapons should be strictly forbidden–and moreover, that we should cooperatively and collectively work to abolish their existence.

Just as Pacem in Terris said “justice, right reason, and the recognition of man’s dignity cry out insistently for a cessation on the arms race,” the new declaration says “[nuclear weapons] cannot constitute the basis for peaceful coexistence between members of the human family, which must rather be inspired by an ethics of solidarity.” Essential to this is the testimony and witness of the hibakusha, those who survived the bombings of Hiroshima and Nagasaki, along with those who are victims of nuclear testing. The very dignity of people in full is relegated to secondary concern with regard to what Pope Francis called a “false sense of security.”

Alexei Georgievich Arbatov, a participant at the conference, suggested that civilization itself is now measured by its ability to destroy itself–harkening to the idea that technocratic weaponry is virtually our highest achievement, and something plausibly which we could lose control over. Human civilization of this kind, he said “has no right to call itself civilization.”

Civilization itself, and indeed the progress by which we measure it, needs to be situated around integral development. This includes relief from material poverty, care for our common home, and a special eye for those on the margins, including victims of war as well as migrants.

Pope Francis said “we need to reject the culture of waste and to care for individuals and peoples laboring under painful disparities through patient efforts…there is a need to promote human beings in the indissoluble unity of soul and body, of contemplation and action.” In full, we need to reject the technocratic throwaway culture which promotes this false sense of security in favor of a world free of nuclear weapons. Progress of this kind, Pope Francis said, “can achieve a world free of deadly instruments of aggression.”

The teaching of Pope John XXIII in Pacem in Terris still rings true in our day. The signs of his time are in fact the same in ours. He said “unless this process of disarmament be thoroughgoing and complete, and reach men’s very souls, it is impossible to stop the arms race, or to reduce armaments, or–and this is the main thing–ultimately to abolish them entirely.”

Response: Reflections on the Vatican Conference on Nuclear Disarmament 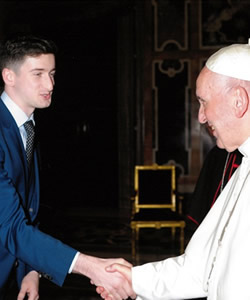