Politics and Piety in Turkey 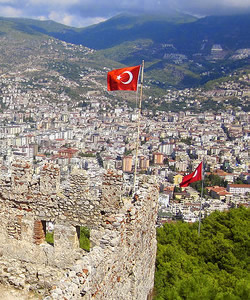 While Turkey is governed by the Justice and Development Party (Adalet ve Kalkinma Partisi, AKP), a party that is heavily steeped in Islam, recent surveys examining personal beliefs have revealed that the general population’s faith levels are flat or even declining compared with a decade ago. The survey, done by Konda Interactive first in 2008 and again in 2018, revealed small changes in some areas but a significant drop in the percentage of respondents calling themselves “religious conservative,” from 32 to 25 percent. In addition, a 2017 Center for American Progress study conducted found that Turkish voters still maintain strong support for secularism: 70 percent of respondents either “strongly agreed” or “somewhat agreed” with the statement that “Turkey should be a secular state that respects the rights of people from all religious backgrounds to practice their faith with no official state religion.”

Nonetheless, in recent years President Recep Tayyip Erdoğan has pushed to expand Turkey’s Islamic identity. He has inserted more religious elements into public education based on his desire to “raise a pious generation.” Skeptical parents—often part of the aspiring middle class—have responded by taking their children out of religious schools and sending them to private, technical, or vocational ones. Erdoğan also prioritized the role of religion in his foreign policy moves, including distancing himself from Western institutions and attempting to make Turkey the center of Islamic world leadership. This has included describing the country’s military deployment in Syria as “jihad” and suppressing speech offensive to Islam. Finally, while wearing the hijab was once banned, in recent years the government relaxed its restrictions on wearing the hijab on university campuses, state institutions, and high schools. The military lifted its ban on hijabs in 2017; it has traditionally been seen as Turkey’s most secular institution, hostile towards Islamization by the government.

This week, the Berkley Forum asks: What is the relationship between religious political party rule and personal piety in Turkey? How do political leaders use religion to further their political goals, and how do individuals or organizations respond? What impact has the Turkish government’s Islamicization push had on its ability to achieve its foreign and domestic policy agendas? How have religious minorities in Turkey reacted?

Response: AKP’s Radicalization of Turkish Islam Among Minorities at Home and the Turkish Diaspora

Response: State Monopolization of Religion and Declining Piety in Turkey

Response: The Islamist Regime and the Emergence of a New Secularist Generation in Turkey

Response: The State of Islamisation in Turkey