Filippo Grandi, the high commissioner for the United Nations Refugee Organization (UNHCR), addressed a large interreligious gathering in Madrid in September 2019 (the annual Prayer for Peace organized by the lay Catholic Community of Sant’Egidio). He challenged himself with a question: “What am I, as an international institution official, doing here, in this religious setting?” He responded that his presence and this partnership have vital importance. The collective response to today’s forced displacement crisis is, he emphasized, a barometer of how the world’s institutions overall are dealing with peace and conflict, borders between countries, and relationships among different communities.

Grandi laments the public discourse about migrants and refugees, which he called a “manipulative and lazy simplification.” Contrary to what many claim, the UN definition of refugees, crafted in the post-World War II period, is still valid. The 1951 Refugee Convention defines refugees as those fleeing violence, discrimination, persecution, and conflict. The ancient concept that such people cannot be forcibly returned to their countries, and must therefore be given asylum, is valid today, to save lives.

Even so, the circumstances that prompt millions of people to move every month—poverty and inequalities, the tremendous impact of climate change, and bad governance in so many shapes and forms—are much more complex than the 1951 definition allows. Ever-more efficient systems of human trafficking aggravate the challenges facing people on routes they embark upon in seeking safety. Libya is perhaps the most atrocious and significant example, but many also face political manipulation where they arrive, especially but not only in rich countries. Everybody on the move is extremely vulnerable: Refugees and migrants need sophisticated responses.

First, international cooperation is being tested. The debate on refugees and migrants focuses far too much on specific details, like arrivals on boats, that are readily manipulated in political settings. With predictable mechanisms to address the needs of people who are fleeting, the time wasted in discussing who should or should not take whom could shift to more serious matters. These include the emergencies that surround the phenomenon of migration, the violence and terrible inequalities that push thousands of people to leave Central America, the combination of climate emergency and violence over scarce resources that has made the Sahara one of the major potential humanitarian crises of our time, and long-lasting conflicts that have plagued us as long as we can remember, in Afghanistan and Somalia. This, he argued, is where the focus needs to be, not on who takes five people or at which port a boat should be docked.

International cooperation requires that we work together. Responses like party politics, closed ports, walls, the rhetoric of “we first” are not only morally wrong; they are “completely useless.” Instead, the focus should go to revisiting post-World War II peace and security mechanisms that evidently are no longer adequate to solve wars. Yet we are used to having mechanisms that are broken. For a start, he urges serious commitment to implementing the Sustainable Development Goals and the global compacts on refugees and migrants.

Second, response to the forced migration crisis is a social barometer. Healthy societies must be inclusive, including of refugees and migrants. Attaching a stigma to people who flee for safety or for other compelling reasons is not only wrong; it also does not help solve the problem. We have clearly underestimated the anxieties in our societies; stigmatization of refugees and migrants is built on these anxieties. Stigma draws on fears that migrants will take away jobs, bring insecurity, and threaten a vague sense of our identity. We must ask why so many buy into these arguments and feel threatened by them, which means looking sharply at inequalities and exclusion in host societies.

Better management is part of the solution. Short-term responses like walls and closed ports miss the real causes of movements. They also block and distort real discussion on good management of refugee flows. Short-term focuses prevent discussion on integration and on more technical issues: How do we define who is a refugee or not? What do we do with people who are not refugees but have vulnerabilities that should prevent them from being returned home? What do we do when the only choice is for people to be sent back to their homes?

The 1951 Refugee Convention and other legal instruments developed over the decades are good compasses to do things the right way. They are also practical instruments to do them in a more efficient way.

And third, responses to the crisis are barometers of how solid our core values are. Laws and norms, national or international, are grounded in the universal and ancient values of hospitality and asylum, in all cultures and in all religions. The overwhelming majority of the 71 million forced migrants are not in the rich world. Most are displaced in their own country, or the country next door, often in communities that are as fragile as the ones forced migrants come from. The Central African Republic and South Sudan experience daily the pain of the displacement of their people in a very fragile environment and offer extraordinary hospitality: Witness the welcome of Rohingya in Bangladesh, of Venezuelans in the poor peripheries of Latin American cities, and of forced migrants in countless African villages.

The sense of brotherhood and sisterhood for those who flee is not an abstraction. But this solidarity with those in distress must not be taken for granted. It must be matched by more and more strategic international support. It must be matched by a more effective quest for political solutions to conflict, matched by dollars and by real strategies and other forms of responsibility-sharing.

Grandi appealed to the religious gathering for ideas. States are intimidated by fears that solidarity will be used to diminish the consensus on which they base their rule. We must therefore look to civil society, religious leaders, faith organizations, and other nongovernmental organizations to be forces of acceptance, of inclusion, and, fundamentally, of peace. What is needed are political strategies that build a social cohesion where all benefit, those fleeing and those receiving them. Ultimately, however, solidarity is a disinterested humanitarian gesture. It gives back humanity to those who have lost it in hardship, living difficult exiles, amidst wars and poverty, in deserts, on fragile boats. But it also has the potential to save those who do not push them away. 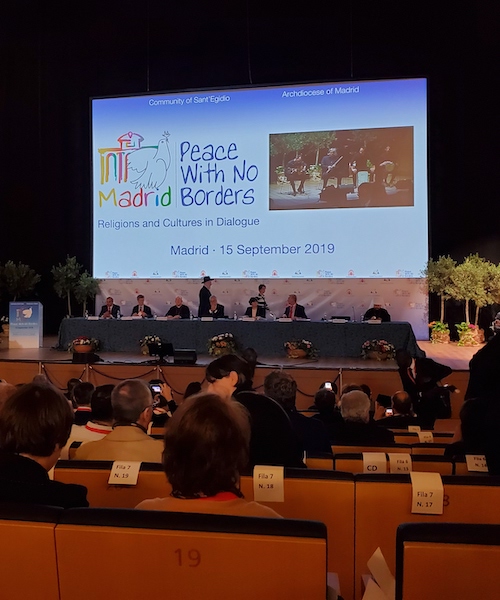