Violence and Micro-Sized Religious Minorities: A Conversation with Jessica Soedirgo

What motivates violence against micro-sized religious minorities, groups that make up less than 1% of a national population? The escalation of violence against Ahmadiyah and Shia communities in Indonesia over the past two decades can provide valuable insight into this question, as well as broader discussions on nationalism and religion in public life.

This week the Berkley Forum sat down with Dr. Jessica Soedirgo, who completed a postdoctoral fellowship at Georgetown University in April 2021, to discuss her research on violence against Ahmadiyah and Shia communities in Indonesia. What follows is a transcript of the conversation, edited for length and clarity.

What types of violence have Ahmadiyah and Shia communities experienced in Indonesia?

It would first be useful to consider the religious violence that occurred during the democratization period, which began in 1998. We can contrast that with anti-Shia and anti-Ahmadiyah violence, which really begins to escalate after 2005. Violence in Indonesia during democratization was really quite large scale, with large numbers of people killed, injured, and displaced.

This is distinct from the violence carried out against Ahmadiyah and Shia communities in Indonesia, where you had much lower levels of killing, displacement, and injury. Though there were cases like in the village of Sampang—where you had the displacement of an entire Shia community through mass arson, vandalism, and intimidation—most anti-Ahmadiyah and anti-Shia violence unfolded during protests. Violence tended to be of a lower scale, taking the form of vandalism of mosques, throwing rocks and debris at religious minorities, and defacing symbolic items. So, anti-Ahmadiyah and anti-Shia violence is still scary, but is distinct from the violence that preceded it during democratization.

What religious or political factors have contributed to the rise of violence against these Muslim minorities in Indonesia?

I see two political processes as particularly significant: democratization and decentralization. During the authoritarian New Order regime, religion was managed very carefully, with the regime repressing political Islam, at least until the 1990s. Only certain kinds of organizations were allowed to organize, generally the “moderate” organizations.

Democratization saw the lifting of restrictions on organization, meaning that organizations across the spectrum of religious ideology were able to organize. The organizations that were allowed to organize during the New Order occupied this moderate Muslim space, so in the democratic era, more conservative groups had less representation. As such, there was a benefit to being conservative because this part of the spectrum was wide open.

This attempt to occupy the conservative spectrum was an important driver of anti-Ahmadiyah and anti-Shia violence, because a lot of the perpetrators—which included Muslim hardliner groups such as the Islamic Defenders Front—were organizing and gaining followers in this space. So that’s how democratization contributed to the rise of anti-minority violence.

In terms of decentralization, decentralization makes local politics more significant. When you have these small groups, they’re not really nationally significant. But when I looked at their experiences historically, they were locally significant. There were tensions between Sunni communities against Ahmadi and Shia communities historically. Decentralization really allowed these local cleavages to become more salient because local politics became really relevant. On top of that, local offices received more resources due to decentralization, meaning that local politicians have more incentives to win political office, heightening competition. Further, local hardliner groups have more opportunities to gain access to patronage. And they mobilized to show that they were important and could help politicians politically.

Is there a path toward peace for Muslim minority communities in Indonesia? If so, what could that look like?

By 2013, they were already a known entity, so groups did not have to spend resources in order to get access to power and patronage. So, the inclusion of actors who have been complicit in anti-minority violence is one way to re-establish political order. This is pretty well established in the literature on peacebuilding, where people need to buy into the system.

If we’re thinking about long-term inclusion, I would argue that the pathway is to re-emphasize the belonging of minority groups into the Indonesian national community.

In my book project, I make the argument that Ahmadiyah and Shia communities pose a challenge to the category of “Muslim” because of their theological differences. The Ahmadis, for example, believe that the founder of their sect is a prophet; this means that there is a prophet after Muhammad. This belief is seen as disruptive to group boundaries.

What might your research in Indonesia suggest about violence against religious minorities and modalities of intergroup conflict elsewhere?

I see Ahmadiyah and Shia communities in Indonesia as examples of what I call micro-sized groups or groups that are less than 1% of the national population.

My argument makes the case that violence against these groups is about the public challenge they pose to group boundaries, which are seen as threatening. My work asks us to think beyond material threats. It suggests that symbolic threats—the ways groups occupy public space—are important. Public practices matter, and these public practices inform threat perception.

How has the Georgetown community contributed to your work as a postdoctoral fellow? What are your plans after leaving Georgetown?

I have been working on my book project at Georgetown, focusing particularly on a major article that will come out as part of this project on violence against micro-sized groups.

In addition, I’ve been very fortunate that Georgetown has funded a research assistant for me, Tyler Seuc, who has done a wonderful job in helping me build a data set that more clearly situates the experience of Ahmadis and Shia with other religious minorities.

In general, I think one of the best things about coming to a new institution is the new people that you meet and the ways that just listening to their ideas can really help widen your intellectual perspective. It’s very invigorating to have exposure to these new ideas and to the wealth of incredibly smart people here at Georgetown.

Since leaving Georgetown, I have joined the Department of Political Science at the University of Amsterdam, where I serve as assistant professor. 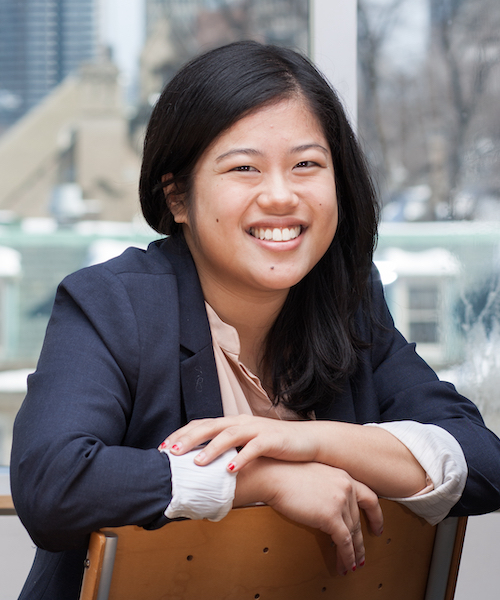 Dr. Jessica Soedirgo was postdoctoral fellow at the Asian Studies Program at the Edmund A. Walsh School of Foreign Service, the Prince Alwaleed Bin Talal Center for Muslim-Christian Understanding, and the Berkley Center for Religion, Peace, and World Affairs at Georgetown University during the 2020-2021 academic year. She holds a Ph.D. in political science from the University of Toronto. Her research is motivated by an interest in ethnic and religious conflict, with a regional focus on Southeast Asia.