On the morning of January 6, 2021, National City Christian Church in Washington, DC, unfurled a large banner declaring “Black Lives Matter” in an act of “proclaiming the Gospel to Thomas Circle and our city,” according to the church’s Twitter account. “Political leaders may come and go; God’s truth is for all times and all places,” the statement continued. Not long after the church displayed the banner and shortly before President Donald J. Trump would incite attendees at a “Save America Rally” to engage in violent insurrection, two white men climbed the steps of the church. One, wearing a black hat with the words “I Can't Breathe,” lay down on the church steps while another, wearing a red hat with the words “Make America Great Again,” pretended to kneel on his neck while they posed for a video camera.

With obvious pleasure, these two white men performed a gruesome parody of police officer Derek Chauvin’s murder of George Floyd by kneeling on his neck for almost eight minutes and 46 seconds. This violent satire, enacted on the steps of a multiracial church and beneath a banner declaring the congregation’s commitment to racial justice, intended more than the erasure of Black experiences of racism that the “All Lives Matter” slogan attempts or the insistence that “Blue Lives Matter” in support of police officers, no matter their tactics. This was a gleeful display insisting that Black lives do not matter and that no claims to religious commitment on the part of Black Christians gave them standing in the white Christian America that the insurrectionists and their supporters envisioned.

This violent satire, enacted on the steps of a multiracial church and beneath a banner declaring the congregation’s commitment to racial justice, intended more than the erasure of Black experiences of racism.

The January 6 mock killing of Black America by MAGA America on the steps of a church took place in the wake of the December 12 “Proud Boys” attacks on Black congregations in Washington, DC, during which they burned Black Lives Matter signs at Asbury United Methodist Church and Metropolitan African Methodist Episcopal Church, one of the city’s oldest congregations. In response to the attack on the church, Rev. Dr. Ianther M. Mills, senior pastor of Asbury UMC, characterized it as “reminiscent of cross burnings,” a tactic the Ku Klux Klan employed frequently. Other commentators noted that these acts invoked the targeting of Black churches for arson and Black congregants for murder.

There is a long American history of representing African Americans as participating in illegitimate religion, framed by critics as superstitious, overly emotional, improperly political, or fundamentally anti-American. Such damaging discourses of Black religious illegitimacy have coursed through American culture—from the criminalizing of Black Atlantic religions during enslavement, to the late nineteenth-century consignment of African Americans to mental institutions for “religious excitement,” to the characterization of early twentieth-century Black new religious movements as “cults,” to the smearing of Black Christians in the modern Civil Rights Movement as “godless Communists,” and to casting the Black Lives Matter movement as a danger to white Christianity in America. In a recent iteration of this tradition during the Georgia senatorial campaign, Republican Sen. Kelly Leoffler’s attacks on Democratic challenger Rev. Raphael Warnock as an anti-American radical relied on characterizing his religious leadership and Christian theology as suspect.

There is a long American history of representing African Americans as participating in illegitimate religion, framed by critics as superstitious, overly emotional, improperly political, or fundamentally anti-American.

As Paul Harvey shows his contribution to the Berkley Forum, conservative white Christian politicians frequently invoke Martin Luther King, Jr. to call for unity while promoting and enacting divisive and damaging policies that target Black communities and communities of color. In uttering the phrases “Dr. King would have” or “Dr. King would not have,” white Americans assume authority to determine the bounds of African Americans’ demands on the nation for justice. Such deployment of King’s decontextualized figure is also an attempt by white public figures to assert authority over the bounds of Black religious life and its relation to the nation. Such rhetoric insists that only certain forms of white American Christianity are consonant with national interests and belong in the public square, framing other modes of Christianity as illegitimate and as a threat to the nation.

It is easy to focus solely on QAnon believers and members of avowedly Christian white supremacist and white nationalist groups as fringe elements that animated the insurrection’s violent assertion of white Christian supremacy and efforts to eradicate the religious claims of other groups to moral ground in contemporary American life. There is a much broader landscape of religion in the centering of white authority as the only legitimate perspective on American history and life, however, of which we should not lose sight. The recent statement by six white male presidents of Southern Baptist Convention (SBC) theological seminaries declaring critical race theory and intersectionality incompatible with Baptist theology represents a rejection of Black people’s claims—religious or not—to the authority to analyze, challenge, and transform social structures of discrimination that shape their lives.

There is a much broader landscape of religion in the centering of white authority as the only legitimate perspective on American history and life, however, of which we should not lose sight.

Similarly, the Trump administration’s 1776 Commission, whose report was released on Martin Luther King, Jr. Day, set itself in opposition to the 1619 Project’s call for Americans to consider how “placing the consequences of slavery and the contributions of black Americans at the very center of our national narrative” can reframe understandings of American history. In re-asserting 1776, also a clarion call of many of the January 6 insurrectionists and their supporters, the commission joined the likes of the SBC seminary presidents in rejecting the idea that attention to slavery and its legacies for Black Americans might have any moral value for considering the future of this nation.

In the wake of the January 6 insurrection, Americans must reckon not only with white Christian nationalism and white prophetic conspiratorial commitments, but with the fact that these are built on long-standing and more widespread discourses and practices that demonize Black religions and frame Black religious voices demanding social justice as un-American. 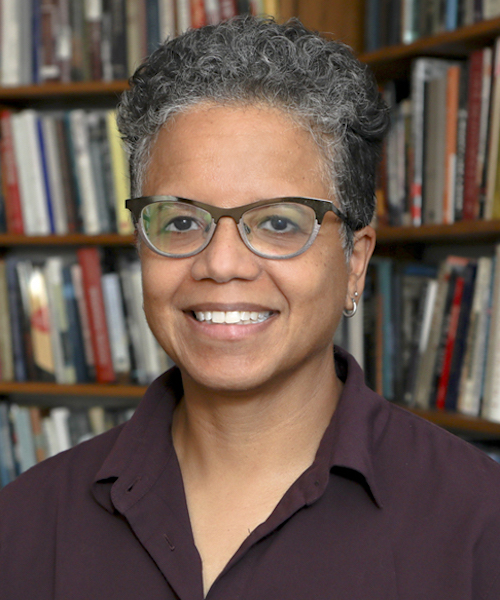 Judith Weisenfeld is Agate Brown and George L. Collord Professor of Religion at Princeton University. She is the author of several books focusing on aspects of African American religious history, most recently, New World A-Coming: Black Religion and Racial Identity during the Great Migration. Her current project explores the intersections of early psychiatry, race, and African American religions.