What is it that we have faith in when we write, and is that different than the faith we put in ourselves—or the author—when we read? And what about when we teach: what categorizations do we rely on and which do we question when putting together a syllabus or engaging students? The conversation in Riggs Library left me with those questions—questions not just about traditional notions of faith and its relationship to literature, but about our ideas about literary production itself.

McDermott, a novelist whose work could easily find a home in courses on American, immigrant, Irish, contemporary, feminist, and religious studies of literature (just to name a few), was eloquent on points of pedagogy and craft. In her own writing process, and in her work with creative writing students at Johns Hopkins, she emphasizes clearing away all of the trappings of the publishing machine—niche markets, influence that borders on mimicry, and the like—and writing to surprise yourself. One only has to pick up one of her lovely, understated novels to see the breadth of approach this produces, from the tight narration of a single night or event to a more sweeping historical and cross-generational tale (and everything in between). But in the world that we as critics, professors, and students inhabit, our impulses go (have to go?) toward categorizing, or at least organizing, texts, inserting them into recognizable frames of reception. So it was that at Riggs, through Paul Elie’s questions, McDermott was brought into a conversation about fiction and faith—which makes sense, given her repeated attention to questions of Catholicism in Irish and Irish-American communities in her fiction. And so it is that while we might market, read, and teach McDermott in a range of courses that each assign her writing to a box, those are designations that, as a writer and while writing, she not only resists but articulates a necessity to resist if she is going to really write, successfully, at all. What are we to make of this tension between production and reception? Is there a way to retain both processes, that of divested interest in normative narratives and intense investigation into specific themes and patterns of art/literature/politics/faith/society?

Perhaps we could—and do—imagine a classroom as a place where we bring in these ideas of process, production, and differentiation in a transparent manner. Most of us in the professoriate are used to reading and teaching through patterns and deviation—here is the assumed doctrinal stance, and here are texts, or our readings of them, that poke and prod and challenge that stance or narrative. While the writer’s intentions might not take center stage in this form of reflection, we might still think through McDermott’s story, for instance, of how she set out to explore the stereotype of the drunken Irish uncle in Charming Billy, as her novelist’s way of both acknowledging the social world she is constructing her novels within, and as a way of setting oneself up for a unique challenge to that world or frame. So while the author and the text cannot be free from categorization, with an awareness of the many already existing cultural narratives, as readers and as writers we might give ourselves permission to write freely within and outside of them. I encounter this constantly in my own field, African literature, where there is a burden to create certain kinds of representations of the continent as well as the burden of breaking from them altogether. McDermott’s work, and her reflections on it, give us pause to reflect on why we might read and write in the first place—not as a break from the world, but as a way to poke and prod our way to new understandings of it. 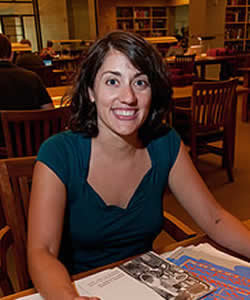 Samantha Pinto is an assistant professor of English and Women's and Gender Studies at Georgetown University. She is currently writing a book on race, gender, and literary aesthetics in 20th century African Diaspora writing entitled Difficult Diasporas: Reading Aesthetics in Transnational Feminist and Black Atlantic Thought.. She was a fellow in the African and African Diaspora Studies Department at the University of Texas at Austin in 2011–2012, where she also did research (funded by a fellowship from the Andrew W. Mellon Foundation) on the Transcription Centre as part of a book project on African Diaspora celebrity and human rights. Her journal articles have appeared in Atlantic Studies and Meridians.
comments powered by Disqus

A Capacity to Wonder
Maureen Corrigan

Not a Problem, but a Fact
Peter Manseau