In the Time of COVID-19, Ventilators Are Scarce. How Do We Decide Who Gets Them?

How much your life is worth?

In an emergency, is your life worth saving? Or are you already too broken?

These sorts of questions are bioethicists’ bread and butter, and they are about to become increasingly acute as the wave of the COVID-19 pandemic breaks in full force across the United States, and we face the kinds of crises, such as ventilator shortages, that have contributed to killing thousands in Italy.

I’m an expert on social ethics and health risks, so let me be clear: The ways our social and medical systems currently pose these questions have immediate and deadly consequences. This is especially true for disabled people, whose lives are often deprioritized even more than usual when life-sustaining resources become scarce. We’re trained to see disabled and elderly people as acceptable casualties of disasters so that we can accept the use of scarce resources to ensure the survival of the young, the abled, and the healthy. We make these judgments even in non-crisis situations — consider, for example, the “Quality-Adjusted Life Year” (QALY), which assigns a monetary value to a year of life and deducts value for illness or disability and is widely used to determine the allocation of medical funding. The COVID-19 pandemic will only exacerbate matters.

What I’ve said isn’t speculation. Recent ventilator allocation guidelines from the University of Washington medical system define the “greatest good” as “maximizing…healthy, long-term survival…weighting the survival of young otherwise healthy patients more heavily than that of older, chronically debilitated patients.” These guidelines have explicitly and unambiguously judged the lives of young, able-bodied people to be worth more and to contribute more to the “greatest good” than those of disabled, ill, and elderly people.

But think about the ethics of such guidelines: Most of us would be, rightly, appalled if we killed people to give their internal organs to others. Why does it become less appalling to take away the life-sustaining breathing apparatus of a living person just because it’s outside their body?

Here’s the thing: Lives are valuable, period. They’re valuable in and of themselves. If we become accustomed to the idea that some people’s deaths are “acceptable losses,” then we lose our ability to see a world in which no preventable deaths are acceptable.

The question we seem to be asking now is “who must die so that others may live?” But that’s the wrong question. We should instead be asking, “What kind of resources do we need so that we aren’t tempted to value some lives above others?”

Resisting the temptation to valuate lives according to perceived utility isn’t easy. The world we live in has conditioned us to do this in myriad ways, and ingrained habits are persistent. As I write, I’m constantly tempted to offer utilitarian rationales for the value of disabled lives — to point out, for instance, that disabled people and communities often have critical knowledge for surviving all sorts of disasters, something that Congresswoman Ayanna Pressley recognized recently on her Twitter feed.

But these arguments actually undermine my point: People’s lives matter regardless of what they do or do not produce, regardless of how useful they may or may not seem to be in any given moment.

Disabled lives are no less valuable than any others. Disabled people deserve access to medical resources, scarce ones included. To affirm anything less is to countenance a system in which ranking the value of human lives is acceptable. Societies with such systems have always turned out badly.

To be sure, affirming my point won’t in and of itself solve the very real shortages of ventilators and other lifesaving treatments. There are not enough of them during this pandemic. The U.S. government has failed to prepare for what it knew was coming, and so when the wave breaks, we will not be poised to stay afloat. People have died. More people will.

We must not, however, become resigned to deaths that should have been avoided. We must instead generate the collective will necessary to build a world in which it is actually possible to prevent these deaths. Every triage decision must point towards a duty to do better in preparation for the next pandemic.

We must stop treating this scarcity of resources as an unalterable given. We must instead demand that our federal and state governments order the manufacturers of ventilators and protective equipment to massively increase production. Demand they relax restrictions on imported medical equipment. Demand that we train more medical personnel in the proper operation of this equipment as quickly as possible, and incentivize the training of many more physicians, nurses, and aides against future need. Demand that medical personnel and caregivers receive hazard pay.

Demand that our government, instead of bloviating about the “10/10” response the president believes he has mounted, immediately offer the kind of massive economic support necessary to radically expand our diagnostic capacity and enable as many people as possible to practice the kind of genuine social distancing that we know saves lives.

In my work on ethics, I draw on classical Jewish sources. In Jewish law, there is a concept called pikuach nefesh (saving an endangered life) which not only allows but requires one to break any other laws if doing so will save a life. Any laws, that is, save for three: those against murder, adultery, and idolatry.

In other words — you must not value profits, or reputation, or protocol, or some abstract idea of the “greatest good” above any living image of God. And no expression of the image of God is more or less worthy than any other.

Triage protocols created by artificial scarcities sacrifice disabled lives because doing so supposedly saves the lives of others. But these protocols — and those lawmakers who put them in place — are accepting that they must ultimately choose between two lives. They are wrong. Rather, the choice is between our current system that forces us to classify some lives as more valuable than others, and a revolutionary system that would make it materially possible to treat all lives as equally in the image of God.

To truly affirm the inherent value of a person, to understand that person as being in the image of God, entails an obligation to build a society in which no one person, and no class of persons, is an acceptable loss. It means treating artificially imposed scarcity as the murderous idolatry that it is.

It means saying that no person, no body, is too “broken” to be worth saving.

​Editor's note: This post was originally published by Disability Acts on March 26, 2020. 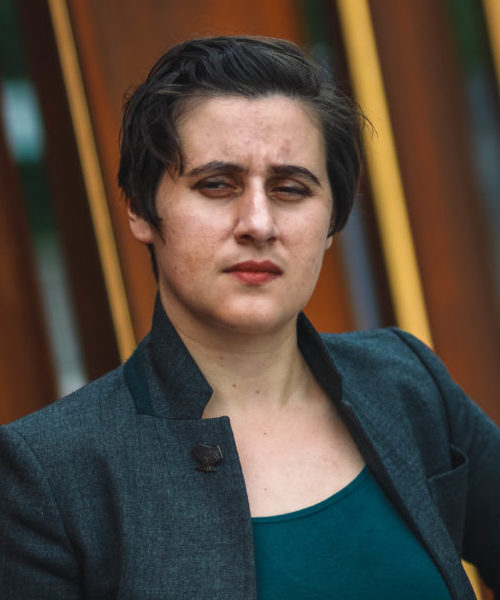 We Are All Responsible: Ethics of Elder Care in COVID-19
Sarah Moses

The New Normal? A Buddhist Perspective on Disability and COVID-19
Darla Schumm

Disabilities in Hiding: How the Pandemic Might Shape Justice for All of Us
Jana M. Bennett

Concerns for People with Disability During COVID-19
Mary Jo Iozzio

Disability and the Politics of Vulnerability
Julia Watts Belser

Compassion in the Face of the COVID-19 Pandemic: A Christian Perspective
Domenic Marbaniang