Dr. Kaushik Basu’s lecture provides an excellent opportunity to continue the conversation on the significance of mental models which Dr. Jim Yong Kim has highlighted. Dr. Basu framed his discussion of contemporary global development trends and challenges in the context of the history of development thinking. His purpose was to show how analytical insights from diverse sources and periods (e.g., from Smith to Harrod to Nash) help inform development policy responses that have made a difference in actual growth rates in specific countries, and more importantly, in the lives of people, especially the poorest 40 percent.


But in talking about mental models, it is important to ponder seriously the “charged debates” in the development field which Dr. Basu acknowledged but did not dwell on in his lecture. Why have they elicited so much “passion” as he says, that can lead to a “change of friends” (or enemies) when there is a perceived shift of frameworks?

There is a danger that mental models may be understood in primarily cognitive and individualistic terms because such a perspective is dominant in both mainstream economics and psychology. But as the new World Development Report has also recognized, what we are engaging are socially constructed and shared frames of meaning—grounded in socioeconomic and political relations and often embedded in and promoted by institutions. “…[W]hat people take to be hard evidence and common sense…is often shaped by economic relationships, religious affiliations, and social group identities …[A]chieving social change in a situation where mental models have been internalized may require influencing not only the cognitive decision making of particular individuals but also social practices and institutions” (WDR 2015: 12).

Development ideas and models are no exception. The World Bank has a deep material, ideational, and institutional stake in global development. It has obviously been at the center of these contentious questions since its establishment (and even Dr. Kim was once part of the movement that said “50 years is enough!”). We need to understand how and why powerful ways of seeing come to be and often persist with tremendous consequences on people’s lives. But as Dr. Kim stressed in his lecture on addressing public health issues, they can also be challenged in order to promote the common good. It is important to dwell on the “charged debates” in order to understand how Catholic social thought can also be located in them, and at the same time to see what prophetic and transformative role the Church in its teaching and active mission can play in these development questions.

In his broad survey of development thought, Dr. Basu noted how economic thinking shifted from questions of large-scale social transformation and wealth-creation to marginalism and equilibrium analysis. He then stressed the contributions of both Classical and Neoclassical economics to contemporary development policies and outcomes.  What he did not say is how the field of Development Studies (re)emerged in the late 1940s to 1960s, precisely because of a deep sense that the prevailing mental models were severely inadequate to comprehend the structural and historical realities arising out of the long years of colonialism and the challenges of decolonization. Crucial to the emergence of this field were the insights of Latin American structuralism, which introduced a “center-periphery” model to frame both global and domestic hierarchies. By the late 1960s to 1970s, the persistence of poverty and inequality amidst aggregate economic growth, and often in the context of violence and authoritarianism, led to the abandonment of the term “development” itself. It was replaced with the call for “liberation” to emphasize the need for systemic change and sociopolitical transformation.

I think it is only through an understanding of these “charged debates” that we can fully appreciate the breadth, depth and wisdom of Pope Paul VI’s Populorum progressio, Octegesima adveniens, and Evangelii nuntiandi which advanced a mental model with the common good, stewardship, participatory and nonviolent change, and integral human development, liberation, and evangelization among its central lenses. Today it is interesting that when Pope Francis speaks of the new evangelization, what he has in mind is a Church that is “called to come out from itself and to go to the peripheries, not just the geographical but also the existential peripheries: those of the mystery of sin, of suffering, of injustice, of ignorance and lack of religion, those of thought and those of every kind of misery.” Pope Francis is surely no Latin American dependencista and liberationist in a 1970s sense. But it is also evident what social context and development language the term las periferias comes from, even as Pope Francis brings this challenge to go to the margins into a new mental model rooted in a spirituality of mercy and compassion.

Finally, as the World Bank now frames development in terms of fostering shared prosperity, reducing poverty and inequality, and promoting good governance, how has it come to grips with its role in institutionalizing the global “common sense” of neoliberalism or the so-called “Washington consensus” since the 1980s (beginning with the 1981 Berg Report)? And to what extent has this dominant neoliberal mental model of the last three decades been produced by and productive of the structures, interests, and relations of a financialized capitalism leading to what Pope Francis calls an “economy of exclusion”, “idolatry of money,” and “inequality which spawns violence”? When Dr. Basu spoke of structural adjustment policies of privatization, liberalization, and stabilization in India, he still used the language of “reform” to characterize them (far from “denouncing the devil”). But he also saw poverty, inequality, and exclusion as serious problems that need to be addressed directly. What is apparent is that the policies which promote economic growth are seen more pragmatically as part of a package of development interventions which can be woven with measures to foster social inclusion. Drawing on Caritas in veritate, can individuals, organizations, and institutions inspired by Catholic social thought help create the communities, networks, and structures of solidarity that are open to and manifest the profound experience of God’s gift of love and compassion, and by working together for genuine human development and justice at various levels help create alternative models of what Pope Benedict XVI has called an “economy of communion”? 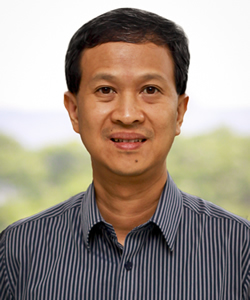 Benjamin T. Tolosa, Jr. is an associate professor in the Department of Political Science at Ateneo de Manila University in the Philippines. He is also a senior fellow at the Ateneo School of Government, where he is the director of the Pugadlawin Project for Political Education and Engagement for Democratization. In addition, he is a part of the Berkley Center's Catholic Social Teaching and the Global Future of Development project. Tolosa is interested in the politics of development and democratization, as well as comparative social thought and global governance. He earned his A.B. in Economics from Ateneo de Manila University and his M.A. in Development Studies from the University of East Anglia in the United Kingdom. He also obtained his Ph.D. in Political Science from the University of Minnesota as a Fulbright-MacArthur scholar.

Social Trends and Signs of the Times
Drew Christiansen