The Future of the Good Friday Agreement

Tuesday, April 10, 2018 marked the twentieth anniversary of the Good Friday Agreement, the deal that brought an end to a 30-year-long sectarian conflict in Northern Ireland. The conflict, also known as “The Troubles,” claimed more than 3,500 lives. Although the conflict was mainly ethno-nationalist, there were significant religious overtones. The unionists, who favor the continuation of strong ties with England, are predominantly Protestant, and the nationalists, who want to have closer connections to the Republic of Ireland, are mainly Catholic.

In my book Religious Leaders and Conflict Transformation: Northern Ireland and Beyond (Cambridge University Press, 2017), I argue that the leaders of the four main churches in Northern Ireland (Presbyterian, Church of Ireland, Methodist, and Roman Catholic) for the most part played a positive role in the transformation of the conflict over 30 years. When the Troubles started in the late 1960s, church leaders initially denied that religion had any role in the tensions, and they were hesitant to get involved in one way or another. The absence of a moderate religious discourse at the time gave way to a fundamentalist Protestant voice, that of Ian Paisley. Paisley was the leader of the Free Presbyterian Church and co-founder of the staunchly anti-Catholic newspaper the Protestant Telegraph. He established the Democratic Unionist Party (which is now the fifth largest political party in the United Kingdom’s Parliament, and was part of a recent controversial deal with Theresa May that helped to keep her Conservative Party in power). Subsequent to Paisley’s overt religious activism and incendiary messages, the leaders of the four main churches started to be more vocal and active.

Throughout the Troubles, the leaders of the churches organized joint workshops and marches, denounced violence, and advised prominent politicians behind the scenes. Gerry Adams, the leader of Sinn Féin between November 13, 1983 and February 2018, talks in his memoir about how vital Fr. Alec Reid was in his vision of peace. Similarly, Albert Reynolds, the former Irish taoiseach, noted in his autobiography that Church of Ireland Archbishop Robin Eames helped him understand the Protestant position and aspirations better. Religious leaders also reached out to paramilitaries in times when politicians had no interest in doing so. The famous 1974 Feakle talks where religious leaders met with the Provisional IRA paramilitaries (a meeting that was cut short by an Irish police raid) is one such example.

There are, of course, limitations to the argument that religious leaders facilitated the conflict transformation. As is the case for any other group, one cannot say that all religious leaders were inclusive. The leaders I talk about in the book were key leadership figures; they created a discourse of unity and made a critical difference, something that we do not get to see in some other conflict settings. Second, sometimes these religious leaders acted independently of their churches; the institutions did not always sign on to ambitious initiatives such as meetings with paramilitaries.

Religious leaders are still visible in the fragile post-agreement Northern Ireland. A couple of months ago, the Economist featured the comments of religious leaders when reporting on Northern Ireland’s questions of governance. Ken Good, a Protestant bishop of Derry and Raphoe, expressed his concern that Northern Ireland “has felt more divided than for a generation”; and Eamon Martin, the Catholic archbishop of Armagh, said, “We seem to have gone into a kind of vacuum at the moment, with very little sense of direction.”

In the immediate aftermath of the signing of the Good Friday Agreement, religious leaders started to comment more on global affairs, visit conflict sites, and share advice. They did not have the reticence they had in the 1970s. Partly thanks to generous EU funding (which is seen as more neutral than the U.S. contributions), there have been multiple community initiatives and partnerships. However, given the issues of governance, increasing segregation, and Brexit in Northern Ireland, there are multiple challenges looming.

Religious leaders have a critical role to play in providing guidance to policymakers and establishing a common citizenship infrastructure that will be resilient to any loss of funding and crisis of governance. This is the time to bring the insights they have shared with the Israelis, Palestinians, and the Colombians back into the action in Northern Ireland. As Bishop of Connor Alan Abernethy told me in 2008, if bridges are not built, we might find ourselves in a worse situation than during the Troubles. 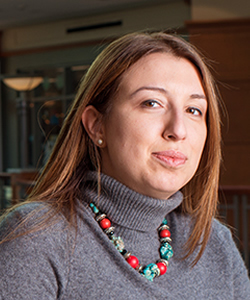 Nukhet Sandal is associate professor and chair of political science at Ohio University. Dr. Sandal is the editor-in-chief of the Oxford Research Encyclopedia of International Studies and chair of the Religion and Politics section of the American Political Science Association. Her publications include Religion and International Relations Theory (2013, with Jonathan Fox) and Religious Leaders and Conflict Transformation (2017).

Brexit and the Conflation of Identities in Northern Ireland