I was embarrassed when my hometown, Hamilton, Montana, appeared in BBC News after my fellow townspeople made enmity-filled remarks in protest of Missoula County opening its doors to Syrian refugees. I cannot say I was surprised though. Hamilton is predominantly white and Christian, and based on the church services and sermons I have observed, the “other”—that is, anything outside the realm of Jesus Christ—is hardly discussed, if not disparaged. My fellow townspeople have little to no exposure of the world outside Montana, and interfaith dialogue is utterly alien to them. Without experience or engagement, one’s worldview will likely be founded in a single, unchallenged perspective.

The BBC article featured a public forum my county commissioners held in response to Missoula’s proposed ordinance. I attended this forum with a friend wielding signs and copies of the Qur'an in support of the refugees. I understood there were legitimate economic concerns for refugee resettlement, but our mission was to combat ignorance, clarify what was misconstrued, and generate a meaningful dialogue. I wish our mission were more successful; alas our presence was smothered by racist, xenophobic statements. When we approached the microphones, we opened our copies of the Qur'an and began addressing comments like “Islam invading and threatening our culture” and “Muslims pray five times a day: are we going to put speakers around Hamilton to accommodate them?” but our voices were lost in a hateful uproar while our county commissioners declined to assist us. Besides us, a few other people spoke in support of the refugees, not including faith leaders.

After the public forum concluded, I reached out to my fellow townspeople. My initial conversations were antagonizing, but I held steadfast and asked them thought-provoking questions. One man asked me: “If a Muslim refugee were to kill your mother, would you want them here?” I promptly returned, “The action of an individual does not mean we should condemn an entire population of people, wouldn’t you agree?” I tried to find the root of their fear and misperceptions—"Have you ever met a Muslim? What do you know about Islam? Why do you not want them here? What does your church say about Islam?” I found that they had little to report except for what was popular on the news outlets they regularly watched or read. Most importantly, their idea of Islam was limited to the Islamic State; they had never met a Muslim. In short, they were grossly unaware of whom they were vilifying.

What I have tried to show here is that interfaith dialogue is impossible unless we try discerning why people have such beliefs; only then can we discover where the problem lies. Severe misperceptions are often rooted in systemic problems born from institutions. For example, if someone grew up conditioned to think the color blue is called “red,” it will be tremendously difficult to deconstruct that perception. This example is analogous to someone who grew up perceiving Islam as evil. Dialogue is important, but it is impracticable unless we understand who we are talking to. 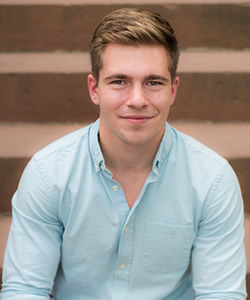 Casey Hammond (C'20) graduated from the College, majoring in government and theology, with a focus on education and religious ethics. At the Berkley Center, Hammond served as a student research assistant for Dr. Michael Kessler and was a student fellow in the 2017-2018 Doyle Undergraduate Fellows program.