“I have to do something.” I woke up that morning and felt in my spirit that I had to act. It was September 23, 2016, and there was a lot going on in the nation. Terrence Crutcher had been shot in Tulsa a few days earlier, and Keith Lamont Scott had been shot and killed by police in my hometown—the city that I love, Charlotte, North Carolina—only three days before. As I saw unrest and protest in my city and in our nation, my heart ached. My heart ached for their families, my heart ached for black people who are constantly faced with racism and stories of police brutality, and my heart ached for the students of color on our campus.

As a black student at Georgetown, it can be very difficult to deal with instances of racism and police brutality because sometimes it can feel as if we are dealing with this pain alone. It’s as if people that look like me are constantly dying and being brutalized and abused, and I must go on with my studies and my classes while many of my fellow white students remain unaffected and generally unaware. Moreover, I knew that I was not alone in those feelings. I knew that there were students of color around me that felt weighed down by all that had been going on as well. It was as if we were waiting for someone to plan the event that would allow the emotions to be released.

When I got up on September 23 of last year, I went through my usual morning routine, but I felt in my heart that this day would not be like the others. I felt that God was calling me to be the one to act on our campus. I decided that I would organize some sort of protest that would take place later that afternoon. Nevertheless, I knew that this would require a community. I went to the Center for Multicultural Equity and Access (CMEA) and was encouraged by Daviree L. Velazquez Phillip, assistant director of diversity education, to go forward with the plan. The CMEA provided us with lyrics to the song “We Shall Overcome,” which I chose to end the rally, as well as conducted outreach to faculty and staff on campus. I borrowed a megaphone from the Georgetown Solidarity Committee, and the Black House assisted me in outreach to students. I also organized a group of students on campus to assist in planning the event.

We decided that the goal would be to provide a healing space for students of color, particularly black students on campus. It would be a space where people could be open and vulnerable and where we could affirm that our lives matter and be seen and be heard by our fellow students on campus. The rally provided a space for healing as well as a sense of community and solidarity. It is a day I will never forget. It took God to light the fire of action in me, and it took a community of people to make it happen. 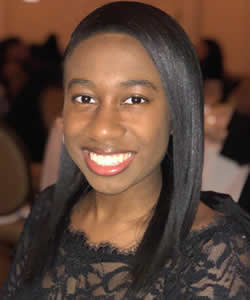 Deirdre Jonese Austin is an undergraduate student in the Walsh School of Foreign Service, class of 2019, majoring in culture and politics with a focus on religion and social justice. She is also pursuing a minor in African-American studies and a certificate in religion, ethics, and world affairs. Her research interests include reconciliation as a means for conflict-resolution to global problems, the role of the Black Church in society today, and how different religions conceptualize and understand social justice. Outside of the classroom, Deirdre is involved in several Protestant Ministry organizations and is also on the boards for the B.R.A.V.E. Summit and Resonant Essence Live A cappella Ensemble. At the Berkley Center, Jonese Austin is a student fellow in the 2017-2018 Doyle Undergraduate Fellows program.