The Saturday Academy was unlike any institution I had ever experienced in my life. I became aware of this even before I had arrived, navigating my way through unpaved, winding inner-city Jakarta roads lined with narrow tin-roofed homes, so narrow that the only pedestrians were neighborhood roosters, the occasional rickshaw-puller, and me. The academy itself rested among the narrow homes on this street, small and unassuming– nothing like the vibrant students I was about to meet. I fell in love as soon as I met them. Wide-eyed, constantly giggling, and eager to learn, the five fourth graders pulled out their plastic makeshift desks and waited trustingly for me to begin teaching. I felt unworthy of their devoted attention; I assumed beforehand that I would have had to beg for their attention or lure them with prizes. But instead, they had voluntarily come out from their neighborhood homes down the street to take remedial lessons this Saturday, pens at attention.

As a nation that experienced the exploitative colonialism of the Dutch until 1945 and, as a new democracy, still suffering from corrupt layers of bureaucracy, Indonesia struggles to provide effective education for its people. This especially true in low-income urban centers like this one in Mangga Dua. As a volunteer for Saturday Academy over the past summer, I spent my Saturday morning providing supplementary lessons to the children in the neighborhood. We poured over English together in the back room—"excited," they would chant with their new vocabulary, "I am excited today"—while in the front of the building older girls, clad in hijabs and flowy skirts, worked on math problems for their graduation exam.

There was just one thing, one unspoken aspect of our identities where we diverged: our ethnic and religious traditions. The Saturday Academy I worked with is run by the Christian church that my minority Chinese family attends, while these children came from firmly Islamic backgrounds. As a Chinese-Indonesian whose family was deeply affected by the 1998 anti-Chinese riots in Jakarta, I am no stranger to the dichotomy that is so often placed between Chinese Christians and Muslim Indonesians. It does not need to be spoken of; rather, it permeates daily life in Indonesia, predetermines our social circles, and has developed over time into a form of implicit segregation. Older generations particularly tend to harbor discriminatory sentiments towards each other, and understandably so. My father’s office was burned down during the 1998 riots; my uncle was stripped of his Chinese surname in favor of an acceptable Indonesian one. For their part, native Indonesians are also the object of heavy discrimination by Chinese communities, and Islam looked down on with disdain.

"Are these differences irreconcilable?" I often ask myself. "Are our ethnic and religious differences too entrenched within our societies for us to coexist?" As I sat in the Saturday Academy and laughed with my students over funny-sounding words, when they wished for me to sit near them and to please come again, I was inclined to believe the contrary. A central tenet of Christian beliefs is acting on love for others, regardless of someone’s faith or background. Meanwhile, the very root of the word Islam itself refers to peace and attaining goodness. Faith-inspired social justice projects, from my Christian Saturday Academy to the various Islamic organizations that also actively serve the community, play a critical role in modern society. They not only benefit the community and construct a better future, but also break boundaries, forge connections, and cultivate meaningful relationships across religious and ethnic borders. They give me hope in a tomorrow where these children and I are not defined by our differences, but rather our mutual desire for a more pluralistic and accepting future. 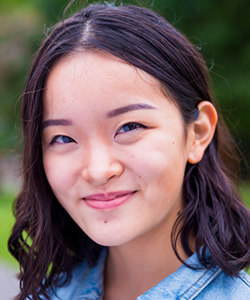 May Teng is an undergraduate student in the College, class of 2020, double majoring in government and English. She is from Jakarta, Indonesia, where she coordinated a student group providing medical care to children in underserved communities. She is interested in exploring pluralism among the crossroads of religion, ethnicity, and culture. In her spare time, Teng is an active member of the D.C. Schools Project, where she teaches English to children from immigrant communities. She also serves as a storyteller for the Georgetown Stories project, a multimedia, first-person documentary series chronicling student life at Georgetown. At the Berkley Center, Teng is a student fellow in the 2017-2018 Doyle Undergraduate Fellows program.