In the Name of Interfaith

Schubert’s most renowned composition, “Ave Maria,” is a staggering masterpiece that always melts my heart. Whenever it is sung by a Catholic assembly, I receive a hefty dose of goosebumps all over my body as I witness the manifestations of deep pride and veneration exhibited by every Catholic around me. Using Tillich’s terminology, I can assert with confidence that I am grasped by the song’s hauntingly beautiful lyrics because they make me experience the meaning of life.

I have had several opportunities to listen to “Ave Maria” with a variety of audiences. On each occasion, I realized that many of those who seemed the most excited about its lyrics were from a religious tradition that has a devotion to Mary. I remember being at that point of my life where I was seeking answers to the many questions that have haunted my mind since early childhood. At that time, I wasn’t blessed with the ability to understand why people talked about the same God but practiced religion differently. I was extremely concerned about the rise of extremism and interreligious violence and wanted to know whether there is a true faith. More importantly, I wanted to know how to combat religious discrimination and intolerance. I had a plethora of questions, so I decided to embark on a journey of theological reflection on faith and religious diversity.

The first stop of my journey led me to participate in President Obama’s Interfaith and Community Service Campus Challenge. This White House initiative invited institutions of higher education to commit to interfaith and community service programming. Much of my early learning on interfaith happened there. The initiative involves people from different religious and non-religious backgrounds who come together to tackle community challenges.

Not long after I joined the program, it became clear to me that though its participants were from different religious and non-religious groups, they all shared a passion for the common good. I came to realize that though they were not grasped by the same religious songs, they were singing from the same hymnbook. In fact, members of the president’s interfaith initiative were able to come together because they all spoke the language of love, a language that allowed them to find common grounds.

While arguing that religion is really one's "ultimate concern" and that God is really the "ground of all being," Paul Tillich observed that “the first duty of love is to listen.” Similarly, Pope Francis appealed for more intense interreligious dialogue by pointing out during his address to participants of Scholas Occurrentes in 2016 that “Dialogue is gentleness. It is the capacity to listen. It is putting yourself in the other person's shoes and building bridges.” Because they promote listening and empathic understanding, interfaith initiatives have the potential to play a significant role in peacebuilding and reconciliation processes. Reconciliation can occur in every sphere of human experience when love, tolerance, compassionate listening, and forgiveness are practiced. This is my take from engaging with different interfaith initiatives.

Since my first encounter with President Obama’s Interfaith and Community Service Campus Challenge, I have had the opportunity to work on various peacebuilding projects. One of the most meaningful of these endeavors consists of traveling across communities to promote nonviolent communication. Nonviolent communication is a powerful method of communication that meets both parties’ needs, helps reduce conflict, builds trust, and strengthens relationships among individuals and communities. My training sessions incorporate the basic principles of interfaith dialogue, and I must confess that the more I work on this project, the more I also become grasped by the idea of a peaceful world.

It wasn’t until engaging with people from different religious and non-religious backgrounds that I realized that it is possible to build bridges of understanding across our differences to make the world a better place for all. It is not until then that I realized that the arc of the moral universe is bending toward nonviolence and religious tolerance. This can be credited to interfaith initiatives. 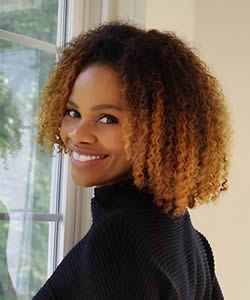 Eliane Lakam is an undergraduate student in the College, class of 2018, majoring in justice and peace with a concentration in human rights, peacebuilding, and education for vulnerable and crisis-affected populations. She is also pursuing a minor in religion, ethics, and world affairs through the Berkley Center. Her current research explores the role of religion and education in countering violent extremism, conflict negotiation, and social justice. She has worked with Pax Christi International, a Catholic peace movement with 120 member organizations around the world. Lakam is passionate about co-creating communities that embody values such as unity, tolerance, forgiveness, and compassion. She is currently involved with D.C. Peace Team as a community organizer and trainer; in this capacity, Lakam travels across communities in the United States to provide mediation and peace education. At the Berkley Center, Lakam is a student fellow in the 2017-2018 Doyle Undergraduate Fellows program.