Countering the Clash with "Theologies of Liberation"

The Clash of Civilizations and Catholic Social Thought

The “clash of civilizations” paradigm, despite being 22 years old and a relic of the Cold War, nation-state based world (in contrast to our “globalized” era where governments have less control over many facets of life), continues to persist and to find new expression in discussions around today’s new hot topic: religion and violence. Over the past week, concerned groups of experts from a wide range of fields including the academy, foreign policy, government, development, business, and faith communities gathered to discuss these topics at the Berkley Center in Washington, DC, and at Intersections International in New York City.


It is easy to draw simple conclusions that there is a clash between the West and the “Islamic World” or that religious extremism is driving conflicts around the world. Indeed, according to the Global Peace Index, global peace has been steadily deteriorating over the last seven years; with 111 countries deteriorating and 51 improving, with terrorist activity one of the main reasons for the global decline in peace. However, a new study clearly shows that religion is not the main cause of conflicts today: Surveying the state of 35 armed conflicts from 2013, religious elements did not play a role in 14, or 40 percent.

What our discussions raised was a clear understanding that religion is but a part of a complex web of interconnected factors, from inequality to culture to colonialism, and that the clash between the West and the Islamic world must be better understood in terms of internal divisions within Islam: Sunni-Shi’a and tribal divides. We also affirmed the positive role that religion has played, and continues to play, in peacebuilding efforts around the world, seeing it as part of the solution, not the problem.
A recent poll by the Huffington Post is troubling: more than half of Americans say they have unfavorable views of Islam, and six in 10 either aren't interested or don't know whether they want to learn more about the faith. Year after year, Americans remain negative on Islam—however, there is hope in young people, who were the most likely to have positive views on Islam, be interested in learning about it, and have Muslim friends.

Over the past semester, this blog has called for reaching out to our fellow man in friendship and love instead of stepping back in fear and ignorance. Students and faculty at Jesuit universities around the world—not all of them Catholic—have put forward the teachings of Catholic social thought to call for a radical change in how we live our lives: in solidarity instead of separation, in community instead of isolation, and extending preference for the poorest rather than excluding the most vulnerable.

In our meetings, we discussed that poverty does not drive conflict, but inequality does. Shared prosperity was seen as the key to building peace and reducing conflict.
This resonates powerfully with the lectures given this semester at Georgetown by the leadership of the World Bank, Jim Kim and Kaushik Basu, and our discussions on the Global Future of Development and Catholic Social Thought. This is a dialogue that needs to be heard and continued. We have much to learn from the powerful teachings of the world’s religious traditions, which must be a part of the global dialogue on ending poverty and inequality. Only then can we move beyond the simplistic division of the world into oppositional sides: East vs. West, secular vs. religious, enlightened and modern vs. backward and traditional.

Katherine Marshall asked, “What is the moral equivalent of war?” for those angry, alienated young people joining ISIS, Boko Haram, and other extremist movements. What alternative movements can inspire and mobilize them?

We have seen Catholic liberation theology arise as a powerful reaction to poverty, inequality, and injustice in Latin America in the mid twentieth century and be taken up as a movement around the world. In the Islamic tradition, a “theology of liberation” also exists, “which advocates a Divine consciousness as the basis for challenging various forms of injustice.” This offers a powerful choice for those wishing to follow the teachings of their religion to end oppression, empower the poor and disenfranchised, and achieve radical equality—without violence. Here Catholicism and Islam both offer a powerful framework for global social change. Other world religions offer solutions as well. It is time to include them in the conversation, listen, learn, and act together. 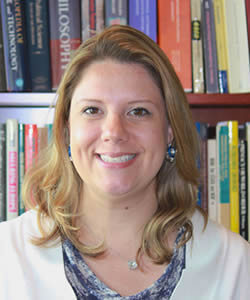 Melody Fox Ahmed is the director of global programs at the National Cathedral School. She worked at the Berkley Center for Religion, Peace, and World Affairs from 2006 to 2018, most recently as the associate director for programs. At the center she oversaw the Doyle Engaging Difference Program, the Religion, Ethics, and World Affairs Certificate, and collaboration with the World Faiths Development Dialogue. She was a lead organizer of the President’s Interfaith and Community Service Campus Challenge, a White House Honor Roll program for which Georgetown was recognized as the national winner in 2015. She is a member of the U.S.-Pakistan Interreligious Consortium of Intersections International and served on the Department of State’s Strategic Dialogue with Civil Society Working Group on Religion Training and Tools. She received her B.A. from Vanderbilt University and her M.A. in global, international, and comparative history from Georgetown University, with a focus on Latin America and the Muslim world.

Catholic Social Thought: A Solution to "The Clash of Civilizations"
Moussa Soumahoro