Islam and Europe: The Role and Impact of a Muslim Convert Community

What does it mean to be Muslim in the West at a time when Islam, and its place in society, is the subject of heated debates concerning religious freedom and religious pluralism? My dissertation raises these questions and aims to provide nuance to these conversations by considering the place of Islam in Europe. Specifically, I historically and geographically situate a prominent Sufi order, the Ahmadiyya Idrissiyya Shadhiliyya, in the European context.

The order was established in the mid-1980s and is comprised of 85 autochthonous Italian and French converts to Islam. Until his passing in November 2017, Sheikh Abd al Wahid Pallavicini, one of the first contemporary Italian converts to Islam, led the order that now has his son, Sheikh Yahya Pallavicini, at the helm. In addition to being a contemplative Sufi order, the community publicly and visibly engages with the French and Italian states and is also consistently involved in various transnational projects regarding the place of Islam in Europe and the world.

To facilitate such engagement, they have founded two public organizations: the Italian Islamic Religious Community (Comunità Religiosa Islamica Italiana) in Italy and the Institute for Higher Islamic Studies (Institut des Hautes Etudes Islamiques) in France. As key representatives of European Islam on issues such as banking, halal food, and interreligious dialogue, they participate in debates on citizenship by interacting with the public administration, media, academia, and civil society. This is often done through conferences, courses, and exhibitions that are organized by the community, by other religious communities, or local entities such as schools or universities. Through constant commitment to the social and political spheres, the members of the Muslim community are attempting to impact a European environment whose interaction with Islam has been in constant flux for over two decades. Using the Ahmadiyya Idrissiyya Shadhiliyya and its public organizations as a case study, I delve into the broader questions of:

Thus far, I have combined detailed historical analysis* with ethnographic fieldwork, examining how the community’s historical and current positioning in European society affects and problematizes notions of “Islam in Europe” and “European Islam.” Moreover, because the Italian state does not legally recognize Islam, I focus on the challenges faced by the Italian Muslim community, as a whole, in trying to attain this official recognition.

On February 1, 2017, the Italian Ministry of Interior made an unprecedented move by summoning representatives from 11 different Italian Muslim communities to adhere to a National Pact for Italian Islam (intended as an expression of an open, integrated community adhering to the values and principles of the Italian legal system). Aside from the various stipulations that would serve to further integrate Italian Muslims into society, this pact was seen as a first step towards the signing of an agreement that would mark official state recognition of Islam. This would mean that, among other things, Muslim communities would receive financial support from the state and not have to rely on outside sources, Muslim places of worship would be protected, and Muslim religious holidays would be observed. Such recognition is something the Italian Islamic Religious Community has been striving for since its establishment.

Following this process closely provides me with detailed insights into how and why this small group of converts plays an intrinsic role in public discourse on the freedom of practicing Islam as a Muslim minority in the West.

* I situate the Ahmadiyya Idrissiyya Shadhiliyya within the broader history of Islam’s place in Europe by tracing the transnational connections that were formed between Sufi sheikhs across continents. I connect this to the current role of the Ahmadiyya Idrissiyya Shadhiliyya, whose networks have spread from Algeria to Italy via Switzerland and Singapore. Integrating this with a study of Islam’s current position in Europe serves to demonstrate that its presence can neither be thought of solely in historical terms of the Moors in the eighth century, nor as entirely related to post-colonial immigration, or as a product of the current migrant crisis. 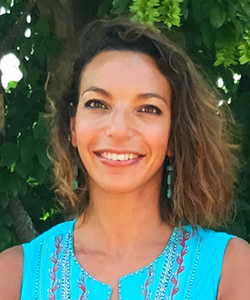 Lulie El-Ashry is a Ph.D. candidate in the study of religion at Harvard University and summer 2018 doctoral fellow with the Berkley Center's Religious Freedom Research Project. In her dissertation she studies Islam’s historical and contemporary presence in the West through the lens of transnational Sufi networks and Sufism in Europe. With a historical and ethnographic case study of a prominent European Sufi order, she considers how autochthonous Italian and French Muslims confront issues of identity negotiation, compatibility of the Islamic tradition with European culture and values, and engagement with immigrant Muslim communities. She also investigates the extent to which the community actively participates in the public sphere to help counter Islamic extremism and ensure the freedom to practice Islam as a religious minority. El-Ashry holds an A.M. and M.T.S. in Islamic studies from Harvard University and Harvard Divinity School and an M.A. and B.A. in political science from the American University in Cairo.

Religious and Economic Liberties in the Great Awakening
Erik Nordbye

Religion and Government in the Chesapeake, 1720-1820
Alyssa Penick