The Cost of Free Religion: Religious and Economic Liberties in the Great Awakening

Thanks to the recent Supreme Court case Masterpiece Cakeshop v. Colorado Civil Rights Commission, Americans have become acutely aware of how religion shapes participation in the economy. Many commentators have sought clarity concerning the case’s rival claims by first disentangling the economic and religious liberties at stake. However prudent this strategy may appear, my own research in colonial American history suggests that separating rights of conscience, property, and non-discrimination make it difficult to tell the story of how Americans came to care so deeply (and discordantly) about each.

My dissertation, The Cost of Free Religion: Religious and Economic Liberties in New England after the Great Awakening, aims to capture an early chapter in this story. Covering the period from the revivals of the 1730’s through the American Revolution, it argues that in the bitter struggle to withdraw from, and ultimately dismantle, New England’s established churches, radical evangelicals forged a new ethical framework defining the purposes and duties of economic life. The result was an innovative tradition of voluntary religion marked by deep affinities for the moral and political arrangements that made capitalism possible in America. Yet this arc was anything but predetermined.

I begin with an observation: leaving New England’s established Puritan churches was a costly act—both literally and figuratively. However, as the First Great Awakening gained steam, it became apparent that the revivals had opened irreparable divisions concerning proper conduct, the nature of community, and the marks of salvation. Radicals denounced the established churches as corrupt, moving to form pure churches composed exclusively of those who had experienced a spiritual “new birth.” Such “true Christians” distinguished themselves in part by self denying habits of work, rest, consumption, and charity, disciplining any signs of stubborn “worldliness” in their communities. Yet these separating evangelical—most of whom would become Baptists—were not allowed to withdraw freely. In both Connecticut and Massachusetts, church and state united to ensure that dissenters paid heavy material and social costs for their departure—costs that increased in severity as resistance to the established order grew more principled and organized. These Puritan commonwealths levied taxes and fees to ensure that religious non-conformity would not grow to imperil social stability. Their project failed, but dissenters who refused to abide by this system of privileges and handicaps learned that constables did not wield the power to fine, seize, and imprison in vain.

Those who chose to protest the alliance of church and state ignited a contentious debate about the relationship between property, liberty, and the common good. The resulting conflict not only transformed the social and political status of American religious communities, but also shaped a capitalist ethic whose influence endures today.

The contours of these developments are especially apparent in two themes emerging from my research. The first concerns the intense religious commitment to private property that dissenters acquired. Resisting state-supported churches, they claimed a right to use their resources to support the churches of their choosing, and denied any other church a right to a share. Thus, when they appealed to liberal theorists such as John Locke, Baptists and others drew as much from the theory of an inalienable right to private property as they did from arguments for religious toleration and freedom of conscience. In this way, dissenters employed individual economic rights to defend the liberties of religious communities.

A second development concerns the spirituality of work and requires a reevaluation of Max Weber’s thesis about what sort of “protestant ethic” nourished the “spirit it of capitalism.” As Baptists and other dissenters rejected the commonwealths’ efforts to aid churches, they set about finding new ways to fund religion without coercion. As a result, an ethic of stewardship displaced the vocational calling that was so important to Weber. Rather than finding religious meaning in a useful occupation through which the individual served God, nation, family, and neighbor, these dissenters came to emphasize “free-will” offerings as the divinely-ordained means to support their churches. Money, rather than work, was used to support the local congregation, rather than the commonwealth.

You might see where my argument is heading—with this constellation of commitments to money, private property, and limited government firmly in place by the end of the eighteenth century, these evangelicals’ descendants were positioned to thrive in a bourgeoning capitalist culture defined by free markets, consumer choice, and the destigmatized pursuit of wealth. However, it remains essential to remember that this movement began with a turn towards more demanding practices of asceticism and charity. The point is not simply to preserve a historical irony, but rather to explain the lasting ambivalence of evangelical communities towards the wealth, status, and rights they acquired, as well as towards the alternative forms of communalism they left behind. 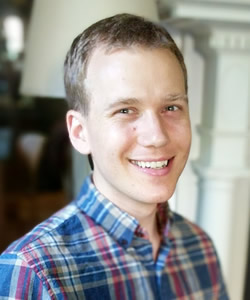 Erik Nordbye is a doctoral candidate in religion at Harvard University and a doctoral fellow with the Berkley Center's Religious Freedom Research Project. His research investigates the relationship between revivalism, church disestablishment, and the history of capitalism. During summer 2018 his research will focus particularly on dissenting religious communities in New England, where rigorous ascetic ideals fused with a vigorous defense of private property to create an economic ethic that endures into the present. Nordbye also holds a B.A. in religious studies from the University of Chicago and master of divinity degree from Harvard Divinity School.

Islam and Europe: The Role and Impact of a Muslim Convert Community
Lulie El-Ashry

Religion and Government in the Chesapeake, 1720-1820
Alyssa Penick