Hans Küng and a Global Ethic: A Route to Building Back Better

“The world is in agony.” This defining starting phrase of The Declaration Toward a Global Ethic is one that so deeply resonates with my own journey. My life-changing moment occurred 13 years ago, when I saw the image of a dead bird with its belly full of plastic. I still recall my then 7-year-old brain going numb with shock as I tried to fathom the unbearable agony of the bird as it choked on the plastic. It was the realization of our world’s agony, symbolized by this bird, that lit the spark in me. As the global ethic states in its concluding paragraph, it changed my consciousness as an individual—and I owe it to the wisdom of Dr. Hans Küng, that touches us through his works, for being the guiding light in my journey of change.

Dr. Küng’s vision is timeless and intergenerational, and although he is not present in person, his thoughts continue to provide us with the fuel for creating a new world order, one that is based on a global ethic of humanity that envelops not just human beings but also nature. I wasn’t born when Dr. Küng drafted the original version of the global ethic declaration, but I had the privilege of attending and speaking at the seventh Parliament of the World’s Religions in 2018 in Toronto, where the fifth directive on ecological issues was added to the declaration, calling for a “commitment to a culture of sustainability and care for the Earth.”

Dr. Küng’s vision is timeless and intergenerational, and although he is not present in person, his thoughts continue to provide us with the fuel for creating a new world order.

As a grassroots sustainability crusader working with the world’s most vulnerable communities who continue to be impacted by the loss of natural resources on which their survival has depended for centuries, I wholeheartedly echo the inclusion of the fifth directive that acknowledges the critical importance of planetary balance for creating a new equitable and humane world order. For no part of our planet remains untouched by the impacts of its 7-plus billion residents and compounded by the apathy of civil society and the myopia of our political leaders.

The accelerating impacts of climate change, global warming, land degradation, biodiversity loss, overconsumption, and wastage are stretching our finite planetary resources to the limit and exacerbating the inequalities that are so deeply rooted in our societies. It is therefore apt that the global ethic document should clearly enunciate this, stating “in most parts of the world, pollution contaminates the soil, air and water; deforestation and over-reliance on fossil fuels contribute to climate change; habitats are destroyed and species are fished or hunted to extinction. Over-exploitation and unjust use of natural resources increases conflict and poverty among people and harms other forms of life. Too often, the poorest populations, though they have the smallest impact, bear the brunt of the damage done to the planet’s atmosphere, land and oceans.”

The over-exploitation and unjust use of natural resources benefits only a few, and the people and communities who suffer the consequences of this are the least responsible for it.

It is important to acknowledge and highlight that the over-exploitation and unjust use of natural resources benefits only a few, and the people and communities who suffer the consequences of this are the least responsible for it. It aggravates gender inequality because women and girls are more resource dependent, so environmental destruction deepens their vulnerability.

In this context, I recall Dr. Küng’s quote: “All historical experience demonstrates the following: Our earth cannot be changed unless in the not too distant future an alteration in the consciousness of individuals is achieved.” The time to vigorously alter the individual consciousness has now come, sooner than we would have anticipated. The COVID-19 pandemic has brought the world to its knees and shown how grossly inadequate our social infrastructure and recovery mechanisms are. The impact on the weak and the vulnerable has been disproportionately severe. It is of immense concern that until now, we did not even know the extent of this severity, especially in the Global South.

The time to vigorously alter the individual consciousness has now come, sooner than we would have anticipated.

The process of recovery must ensure that we do not repeat the mistakes of the past. The signs that we will do so are already out there—most developed nations are citing the need to accelerate the economy at the cost of everything else. Our planet’s ecosystems are at a tipping point. Many might not regenerate unless we take action now. Now, more than ever before, we need to adopt the global ethic in all its entirety in order to build back better. It will require the engagement of all stakeholders—and the recovery process must be at the grassroots level for it to be resilient. We must also be flexible in the implementation of the global ethic, tailoring it to regional and local challenges so as to make it more effective. The road to recovery will not be easy. Dialogue, greater understanding, and empathy will be the key ingredients that will see us through. We need to be together to come out stronger. 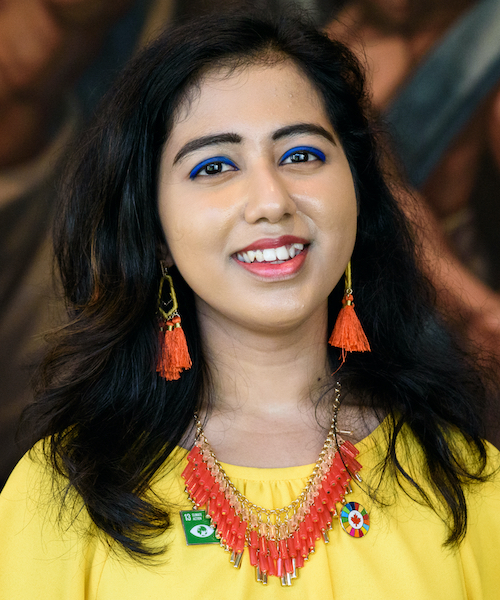 Kehkashan Basu is the founder and president of the Green Hope Foundation, a global social innovation enterprise. Named to the Forbes "30 under 30" list in 2021, Kehkashan is a UN Human Rights Champion, a National Geographic Young Explorer, and the youngest Board of Trustees member at the Parliament of the World’s Religions. She received the International Children’s Peace Prize in 2016.