Rohingya in a Humanity-Defying Crisis

The Rohingya are a Southeast Asian people with a population of about 1.3 million, mainly found in the Rakhine state of Myanmar. Formerly known as Burma, Myanmar is a country that shares borders with Bangladesh, India, China, Thailand, and Laos. Per 2017 estimates, Myanmar has a population of 56 million, which is 89 percent Buddhist, 6 percent Christian, and 4 percent Muslim. After its independence from the British Commonwealth in 1948, the country endured about five decades of military dictatorship, which ended in 2016 with the instatement of Nobel Peace Prize laureate and former human rights campaigner Aung San Suu Kyi as state counselor.

The history of the Rohingya people in Myanmar goes back to the twelfth century, while some date it to the founding of the region known today as Rakhine. Rohingya concentration in the Rakhine state is attributed to internal migrations that took place during British colonial rule over the Indian subcontinent. Following Burmese independence, the Rohingya Muslims were viewed negatively by the Buddhist majority, who still considered them “Bengali” due to their ancestors’ migration patterns. Anti-Rohingya sentiments flared up in occasional calls by Buddhist extremists for ban on Islamic headscarves and Muslim ritual slaughter of cows. Over the years, the Rohingya suffered unabated social and governmental persecution, which culminated in their statelessness after the revocation of their citizenship in 1982. Their condition has since worsened into violent crisis, resulting in a rash of killings and displacement.

Recent escalation of ethno-religious clashes affecting the Rohingya minority began in 2012, when 200 people were killed in Rakhine over the rape and murder of a Buddhist girl, allegedly by a Rohingya Muslim. It worsened in 2016 and spilled over to 2017, forcing more Rohingya people to flee from their homes. Burmese authorities have been carrying out a brutal military campaign against Rohingya militant elements and unarmed civilians, which by October 2017 had led to the extrajudicial murder of more than a thousand, and forceful exile of more than 500,000 Rohingya to the Bangladeshi border, according to United Nations data.

So far, there are documented reports of horrific crimes against the Rohingya, extracted from both media records and refugee testimonies, which revealed atrocities like shooting of women and burning children, and razing of their houses. These heinous crimes have attracted accusations of ethnic and religious cleansing against the Burmese military. Aside from documented reports of military war crimes, there has been an uptick in Buddhist vigilante violence against the Rohingya–arbitrary killings, rapes, and expulsions. Amnesty International has confirmed the Myanmar military’s use of landmines near the border with Bangladesh after border guards reported what appeared to be injuries caused by anti-personnel mines.

The role of religion in the Rohingya conflict could be historically attributed to the political dominance of the Bamar Buddhist majority in Myanmar, who are accused of espousing a racist interpretation of Buddhism. As the major ethno-religious group nationally, these Buddhists consider some minority ethnic stocks in the country as unwanted immigrants and enemies. Religion is the cheap culprit that is used to justify social support for discriminatory laws and violence against the Rohingya. Buddhist militant vigilantes and Myanmar authorities view the minority Rohingya Muslims as an existential threat, perceiving Buddhism to be vulnerable to Islam.

After repeated failure of the Burmese authorities, led by Aung San Suu Kyi, to protect basic human rights in Rakhine state, the global community should put pressure on the country to immediately reign in the military forces and halt their brutal operations. Myanmar military-led “counterterrorism” operations should be in accordance with human rights laws, including laws guaranteeing the right to religious freedom. Other ways to douse the conflict could be a UN resolution imposing an arms embargo on the Burmese military and economic sanctions against the government to force it to halt the crisis. Burmese authorities must also be made to prevent mob violence by militant Buddhist vigilantes, and prevent further radicalization of Buddhist youths and gangs.

Long-term resolution of the Rohingya crisis should include implementation of the August 2017 recommendations of the advisory commission led by Kofi Annan, providing a legal pathway to citizenship for the Rohingya. To effectively prevent future conflicts, peacebuilding and reconciliation mechanisms must be explored toward social reform, to address societal tendencies that justify contempt toward the Rohingya and violence against all minorities. Strong legal and institutional policies toward religious freedom and interfaith trust should be implemented. Re-integration projects should be designed to strengthen social resilience, stem radicalization of youth from all sides, and curb Rohingya youth’s vulnerability to terrorism and Islamism. 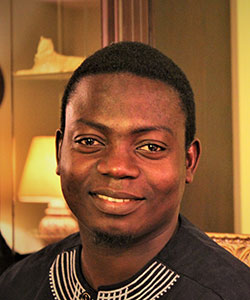 Mazhun Idris is an Atlas Corps Fellow and the current Nigeria Country Advisor at the Center for Islam and Religious Freedom in Washington, D.C. He has researched religious freedom, Islamic theology, peacebuilding, and violent extremism at the Newseum Institute, the International Institute of Islamic Thought, and the Summer Peacebuilding Institute of Eastern Mennonite University. Mazhun’s publications include books, papers, and literary and journalistic pieces.