My book Chicago Católico: Making Catholic Parishes Mexican (University of Illinois Press, 2020) tells the story of how Mexicans have made a home in Chicago and its churches. Mexican people began to settle in Chicago a century ago. Today, Mexicans and other Latinos are transforming the archdiocese into Chicago católico, in ways that past generations of German and Irish bishops, priests, and sisters could not imagine.

I use the Catholic parish to view Mexican immigration and transformation in the United States. For individuals arriving from Mexico, these parishes served as a refugio (refuge). Mexicans fiercely attached themselves to specific parishes, much like European ethnic groups in days gone by. Women joined the guadalupanas and their husbands joined the Santo Nombre (Holy Name). The emerging Mexican parishes became a place to speak Spanish, to find a job, and to reminisce about Mexico. At the same time, these parishes had an Americanizing influence on Mexican members. Men and women took part in regular devotions and parish activities, in ways quite similar to Polish, Italian, or Irish Catholics elsewhere in Chicago. Their children participated in May crownings of the Virgin Mary and played baseball on parish sport teams. At the same time, many Mexican-American laypeople gained a sense of mexicanidad by participating in its religious and social events. The parish acted as a glue that connected immigrant parents and their U.S.-reared children.

My research stretches and expands Chicano history narratives that often minimize the role that religion plays in everyday lives. Chicano history with its activist and secular bent has often marginalized the place of religion for Mexican people in the United States. Mexican immigrants to Chicago were more than “hog butchers to the world,” mill hands, and factory workers. They had families, built communities, formed sports teams, and went to the movies. And Mexicans certainly went to Mass. Religious life countered their (often racialized) subordination as workers.

Much of my book explores the transformation of the Pilsen neighborhood, once anchored by 13 parishes, nearly all home to a specific ethnic group: Czechs, Lithuanians, Poles, Croats, Slovenes, among others. Mexicans people began to settle in Pilsen in the 1950s and tentatively entered these Eastern European parishes filled with “polacos” as Spanish speakers often labeled the established whites. By 1970, Pilsen had become Chicago’s first Mexican-majority neighborhood. My research in Pilsen uncovered stories that illustrate the fraught transition from the parish as European-American ethnic enclave to a shared congregation. In time, most churches became de facto national parishes serving the needs of Mexicans and Mexican Americans. Mexicans asserted distinctive devotions and remade parish after parish, with increasing effect throughout Pilsen.

Julia Rodríguez was one such Mexican-American migrant. Arriving from the Rio Grande Valley in Texas, Julia was among Pilsen’s early Mexican residents. One afternoon in 2004, we sat in her cozy living room in Pilsen while I listened to her stories about growing up in rural Texas and her life in Chicago. It was our first meeting. Almost all of my oral histories had been conducted in English. But as we began the process, Julia confided that she would prefer to tell me about her life in Spanish. At age 72, she was a lively talker, and I enjoyed her rural, Tejano way of speech. After five decades in Chicago, Julia felt much more comfortable in Spanish than in English. Her preference for Spanish reflected the all-encompassing Mexican enclave that formed in Pilsen—where Julia raised her children, did her shopping, and became a member of St. Procopius Church, once a large Czech parish. Julia laughed often as she reflected upon her life. I turned off the recorder, and Julia asked me to go into her bedroom: There was something there she wanted to share.

I found an eight-by-ten glossy black-and-white photo: Julia, her husband, and several children dressed in folklórico costumes, with a heavy framed print of the Virgin of Guadalupe, stood around a smiling Mayor Richard J. Daley. The group portrait took place in the mayor’s office; the city flag and seal are visible behind them. Clearly, Julia treasured this photo as, prior to my arrival, she had left it to share with me. Given her impoverished childhood picking cotton and just a bare-bones education, this portrait expressed an adulthood of stability, respectability, faith, and belonging. Here Julia stands proudly as a Mexican-American Catholic with the pinnacle of her adopted city: the mayor, himself a Catholic. With her husband, Rubén, and the parish children, she represented St. Procopius. Two decades earlier she hesitated to attend Mass there (“¡Los polacos como que no!”); by 1976, St. Procopius was home. Chicago had usually been willing to give a chance to Mexicans, fellow Catholics, who, like the Irish, Czechs, Poles, and Lithuanians, also expressed their devotion to the Virgin Mary. Julia’s prized photo, the St. Procopius parishioners with the mayor, was taken in December 1976. In April 1977, the first Via Crucis took over 18th Street. These events differed greatly in tone and message, but both showed the rise of a Chicago católico. 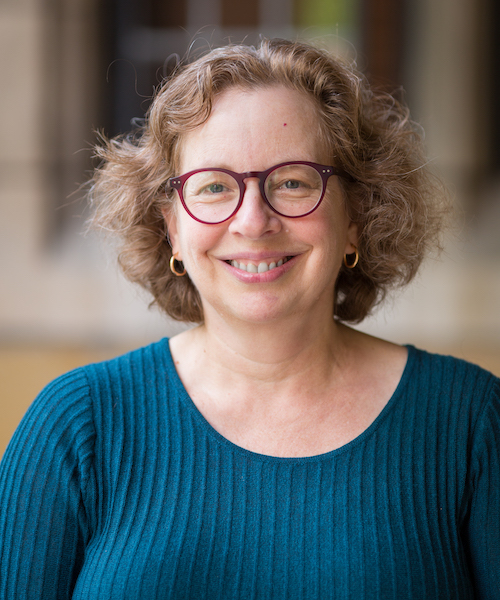 Deborah Kanter is professor and chair of history at Albion College. She is author of Hijos del Pueblo: Gender, Family, and Community in Rural Mexico, 1730-1850 (2009) and Chicago Católico: Making Catholic Parishes Mexican (2020).