On Immersion and Mercy in Jesuit Education: Pope Francis and the Call for Encounter

For the Center for Social Justice Research, Teaching & Service (CSJ) at Georgetown University, Ignatian-inspired immersion is one of many pedagogies that we use in our work with diverse community partners and students to create a more just and humane world. Other pedagogies—or, as I sometimes call them, open doors and windows—include community-based learning, community-based research, advocacy, activism, direct service, and training. Immersion fits in this experiential learning portfolio by being what the Association of American Colleges and Universities describes as a high-impact practice that creates a common intellectual community. It prioritizes and centers voices from outside of our own elite, predominantly white institution.

It consoles me to imagine that, at some point, as archbishop of Buenos Aires or as a parish priest of a rural church community in Argentina, Pope Francis was asked to meet youth or students on an “immersion.” Perhaps high school boys from a Midwestern Jesuit secondary institution slept on the floor of his basement church, or students at the Jesuit Universidad del Salvador in the capital city received a blessing from him during a week-long deep dive into issues of justice during a holiday break. Maybe these experiences were among the first heart strings to spark his notable and public way of proceeding—encounter.

It consoles me to imagine that, at some point, as archbishop of Buenos Aires or as a parish priest of a rural church community in Argentina, Pope Francis was asked to meet youth or students on an ‘immersion.’

CSJ draws on the philosophy of Rev. Bernard Lonergan, S.J., and, seeking additional consolation, I surmise that this twentieth-century Jesuit’s texts were assigned to Pope Francis, during his formation within the Society of Jesus. Perhaps they too are at the root of his praxis of encounter. Lonergan posits that authentic subjectivity leads to genuine objectivity; that is, I should always be searching for truth. Authentic subjectivity consists not in overcoming the particularities of my subjective viewpoint in order to imbibe in a false universal with “others,” but in more deeply understanding the particularities of my own perspective, so that I can value what is distinguishable and complementary to the viewpoints of others. Lonergan didn’t surmise that there was an objective reality; rather, he suggested that no one—not even God—has a complete gaze or analysis of a singular reality. Leaning into Lonergan, Francis’ encounter means that I engage difference with humility, generosity, and patience, not only to perceive the other’s point of view, but also to honestly see my own ways of living and being.

Immersion disrupts one’s insistence of “a single story.” Through the deep dive into a particular social justice issue and exposure to diverse realities, participants learning through immersion foster solidarity via human contact, rather than classroom concepts. That is, as the then Jesuit Superior General Father Kolvenbach stated in 2000, “when the heart is touched by direct experience, the mind is challenged to change.” This transformative pedagogy finds resonance with my own training in peace education and conflict resolution, within which “contact theory” has enjoyed a central—though complicated and critiqued—position, beginning with the post-WW II seminal work on prejudice by Gordon Allport (1954) and that on the authoritarian personality by Theodor Adorno et al (1950).

Through the deep dive into a particular social justice issue and exposure to diverse realities, participants learning through immersion foster solidarity via human contact, rather than classroom concepts.

We all know that Pope Francis has done things a bit differently than his predecessors, shaking up longstanding notions of what it means to be and live in the world in which we find ourselves today. High on that list is his insistent invitation to build a culture of encounter. I offer sound bites of his teachings in my remarks at annual kickoffs or orientations for CSJ’s Alternative Breaks Program, through which 150 students engage in a year-long immersion, centered by a trip at spring break. Francis’ encounter provides, I suggest to the students, ample inspiration and a toolkit for approaching the formidable experience ahead of them. While the pope talks about reaching out and fostering dialogue—certainly something we hear about at Georgetown and across higher education—he furthers his imperative to pursue friendship outside of our usual circles and to make an intentional point of being in contact with people who are neglected, ignored, or considered disposable by the wider world. Pope Francis implores that I start with the person and the relationship, and that I start ready to give, as well as to receive. For Pope Francis, the institutional relationship is not enough; it is a bridge to the building of personal relationships. Be open to the encounter, I preach to the students—whether it is the receptionist at the hostel where you will stay, the executive director of a major nonprofit that you will visit, a third grader standing alone during recess at a school you will visit, or an elderly man at a soup kitchen. Maybe it is the person sitting next to you, I remind them.

Within the invitation to encounter through immersion, what stands out is Pope Francis’ persistence of a give-the-benefit-of-the-doubt compass toward mercy, a tireless openness to changing one’s mind. Mercy implies that through encounter, I place emphasis on compassion as my first reaction, rather than judgment. Sadly, it's the latter that we can be schooled to pursue, at the loss of the former. With compassion as the basis of encounter, the assaults on social justice, the complexities of poverty, and the necessary commitment to human rights become more accessible calls for action around which to wrap our head, heart, and hands.

We learn from the Jesuits that God is in all things, and to me, that is what Pope Francis is referring to: Encounter is made sacred when I take the opportunity to see another person and to allow them to see me.

In Misericordiae Vultus, Pope Francis writes: “Mercy is the force that reawakens us to new life and instills in us the courage to look to the future with hope.” Immersion is all about new life—people with whom we might only see once, people with whom we might stay in contact for years. Participants see life anew in the form of new vegetation, new animals, and new flows of waters, geographies only yet seen in movies and in textbooks. While I know the students will take photos on their spring break trip, I encourage them to pause and soak in that mental snapshot of a place or to put to memory “something somebody said” that they may rely on when they need a dose of courage to proceed into the future with hope.

Further along, Pope Francis offers: “Mercy is the fundamental law that dwells in the heart of every person who looks sincerely into the eyes of his brothers and sisters on the path of life.” We learn from the Jesuits that God is in all things, and to me, that is what Pope Francis is referring to: Encounter is made sacred when I take the opportunity to see another person and to allow them to see me. Encounter allows me to practice critical compassion, to suspend judgment, to re-learn that “bringing it home” is filled with hope for the future and grief for what I have left behind. It allows me to tell stories, and to remember that telling stories is a way to keep people alive, even after we have left them behind or they have left this world behind far too early. 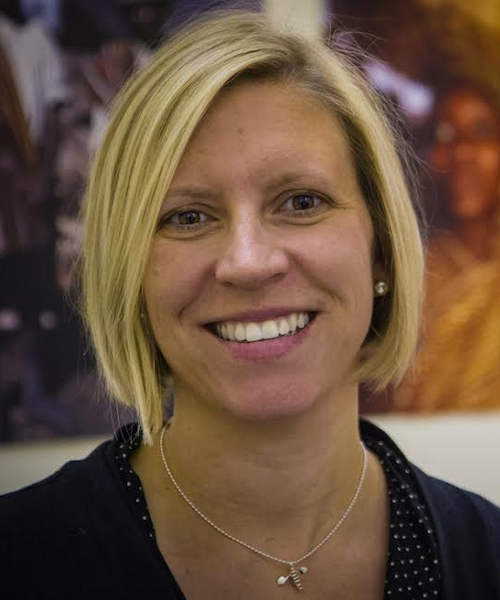 Dr. Andria Wisler has been the executive director of Georgetown's Center for Social Justice Research, Teaching and Service (CSJ) since January 2013 and is an associate teaching professor in justice and peace studies at Georgetown College. She is also an academic advisor for the Education and Social Justice Project, co-sponsored by the Berkley Center and CSJ. Her most recent publication is the forward to the 2021 anniversary edition of Comprehensive Peace Education by Betty Reardon.