Challenges of Building Common Ground: What Cardinal Bernardin Can Teach Us

November 14, 2021, was the twenty-fifth anniversary of Cardinal Joseph Bernardin’s death. He is remembered for his work on interreligious dialogue, peacemaking, the consistent ethic of life, and, perhaps most importantly, common ground. This anniversary coincides with one-year anniversary of Fratelli Tutti, which calls for bringing down the walls that divide us. It also comes in a year when arguments about climate change, infrastructure, vaccinations, and elections have all but consumed us. Still, Bernardin’s legacy holds important lessons for Catholics as we continue to try to put Fratelli Tutti into practice.

In the 1980s, Cardinal Bernardin held listening sessions where Catholics could talk about controversial issues. With the Catholic Common Ground Initiative (CCGI), entrusted to friends shortly before his death, he envisioned gatherings of bishops and influential lay Catholics to heal divides in the Church. Decades before current talk about synodality, Catholics at these meetings were finding ways to connect.

My own interest in common ground began in my senior year of college. Thirty-five years ago this month, my husband and I started dating. Our formation in different Catholic homes (his marked by Reagan, Operation Rescue, and This Rock; mine by JFK, Hans Küng, and the Berrigan brothers) gave us a lot to talk about. I learned that politics and religion were more complicated than I was raised to believe, and that I could love and share a great deal with someone whose vote cancelled out mine.

In moral theology, theologians have found that focusing on virtue opens up space that talking about sin does not. We can talk about meaningful things despite our differences.

I had the privilege of being part the annual meeting of Catholic Common Ground Initiative when the topic was sex and the conversation was particularly heated. One afternoon, I left and went for a long walk. But I came back. Knowing that many involved in the CCGI had been coming back year after year, inspired me.

Some argue that today, we should stop putting energy into common ground efforts because they are ineffective. But Francis insists that “unity is greater than conflict.” Often what is needed is a different kind of conversation. While dialogue centered on contentious issues can be ineffective, shifting the question can work. For instance, climate change scientist Katharine Hayhoe notes that ongoing division exists when people are asked if climate change is human caused and threatening, but when asked about alternative energy development and reducing fossil fuel use, nearly everyone is on board.

In moral theology, theologians have found that focusing on virtue opens up space that talking about sin does not. In family ethics, for instance, bracketing contentious issues allows for pursuit of new questions: What does it mean to parent well? How can families think better about work, time, food, and money? We can talk about meaningful things despite our differences.

We May Need a Mix of Virtues

In his last book, The Gift of Peace, Cardinal Bernardin contrasts centering his own desires for his life with giving over control to God and letting go, a process he learned through daily prayer and personal experience as a cancer patient. Although he did not, to my knowledge, use the concept of letting go in the context of common ground work, it seems at the very least implicit.

To commit to dialogue across deep disagreement requires more than tolerance. It takes letting go of preconceived notions of the other and one’s own certainties. It means being open to asking and answering real questions, listening to the back stories that inform people’s positions, and seeing not just the humanity of the other but one’s own flaws and limits.

To commit to dialogue across deep disagreement requires more than tolerance. It takes letting go of preconceived notions of the other and one’s own certainties.

But, and this is a crucial but, the virtues linked to letting go—humility and vulnerability—have to paired with the virtues of standing up, including truth-telling and just anger. As Steve Millies remembers, when Cardinal Bernardin first announced the CCGI, criticism came from conservatives who were anxious that truth would be papered over with tolerance. Today, criticism is more likely to come from the left. Common ground is associated with meeting in the middle, placing civility over speaking truth, and asking people on the margins to spend valuable energy explaining once again why their lives matter to people who just don’t get it.

Bernardin’s critics were not wrong to worry about compromise. Common ground cannot mean giving up on truth or denying anger a place. Some Black, Latinx, Asian, LGBTQ, and feminist Catholics are justifiably tired of charged conversation on issues that shape their daily lives. Not everyone is called to the work of difficult dialogue. For those who are, it is possible to be humble and “let go” without “losing our identity as individuals” (FT, 230). Francis calls Catholics to seek “points of contact, building bridges,” (FT, 216) while insisting on truth (FT, 227).

Cardinal Bernardin placed a lot of hope in dialogue. Pope Francis, too, promoted dialogue in Evangelii Gaudium, modeled it at the synods on the family, and is known for his openness to all comers. But in Fratelli Tutti, encounter replaces dialogue as the most important frame.

Do we know each other well enough to identify the walls between us? When Black, Latinx, and immigrant Catholics are included, the picture of the U.S. Church is more diverse, less polarized, less easy to characterize as right or left. Sociologist Tricia Bruce’s work on Catholic parishes shows that the vast majority of parishes are ideologically diverse, and this presents a great opportunity.

Inspired by both Cardinal Bernardin and Pope Francis, and by ordinary Catholics, we who continue to hope for common ground might do well to cultivate a mix of humility and truth-telling.

To find common ground, though, we need more than dialogue. This is where Francis’ insistence that “The process of building fraternity, be it local or universal, can only be undertaken by spirits that are free and open to authentic encounters” is crucial (FT, 50). For example, at my former parish, St. Francis Xavier in St. Louis, anti-racism work has brought together several parishes in the same deanery, not primarily for dialogue but for encounter—walks, picnics, prayer, justice work, and a co-written play about growing up Black and Catholic.

Inspired by both Cardinal Bernardin and Pope Francis, and by ordinary Catholics, we who continue to hope for common ground might do well to cultivate a mix of humility and truth-telling. We might need to encounter each other in deeper and more sustained ways than dialogue allows. Instead of talking about the walls we assume are locked in place, let’s try eating, playing and working together, building unity from the ground up. 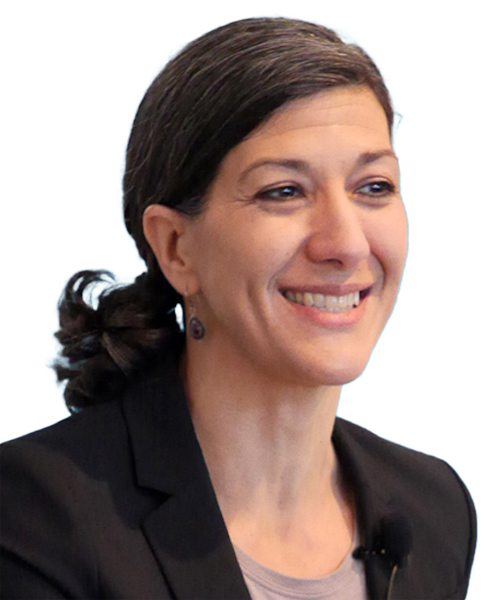 Julie Hanlon Rubio is professor of social ethics at the Jesuit School of Theology, Santa Clara University in Berkeley, California. She writes about Catholic social thought, family, and politics. Rubio is author of four books, including Family Ethics: Practices for Christians (2010) and Hope for Common Ground: Mediating the Personal and the Political in a Divided Church (2016). Her current project is Catholic and Feminist: Is It Still Possible?