To Live is to Encounter—Just Like Jesus: Pope Francis and the Spiritual Exercises

Encounter is a way of life. Just as we are shaped by our encounters with others, we fail to be shaped by encounters we avoid. Pope Francis’ call to build a “culture of encounter” is not just an invitation to bring people together across differences in the spirit of mercy, solidarity, and hope; it is also how disciples emulate Jesus Christ’s teaching and healing ministry by practicing inclusive outreach, engaging in mutually respectful exchange, and opening up new possibilities.

Jesus shows us how an intentional approach to encountering others can produce personal and social transformation. Although Jews and Gentiles were divided by belief and custom, Jesus’ inclusive table fellowship meant breaking bread with people who both suffered and benefitted from the oppressive Roman Empire. With this habit, Jesus revealed the dignity of those considered insignificant and unworthy. He also fashioned an ever-more-inclusive sense of communion that erased categories of “us” and “them.” He didn’t just heal the sick or provide food to the hungry; he made room for sinners like Zacchaeus, an encounter that spurs this corrupt and wealthy man to repent and atone for his extortion and exploitation (Luke 19:1-10).

Pope Francis’ call to build a ‘culture of encounter’ is not just an invitation to bring people together across differences in the spirit of mercy, solidarity, and hope; it is also how disciples emulate Jesus Christ’s teaching and healing ministry.

Jesus also demonstrated that encounter requires much more than unilateral charity. It demands humility and curiosity, a willingness to listen and learn. When Jesus encounters Bartimaeus, who is blind, he doesn’t rush to cure him. Instead, he asks, “What do you want me to do for you?” (Mark 10:51). Encounter means abandoning our presumptions and opening ourselves for honest exchange, just as we witness in Jesus’ interactions with the Syrophoenician woman that seem to challenge and change them both (Mark 7:24-30). Insofar as encounters are often situated between people with unequal status, privilege, and power, Jesus’ example compels us to contest these asymmetries in defense of human rights and to restore just relationships in our communities.

It is easy to miss how these encounters shattered the worldview of Jesus’ first followers. For example, we’ve heard the story of the Good Samaritan so many times that we’ve domesticated the radical demands implied by Jesus’ command to “Go and do likewise.” Jesus’ audience would’ve been judging the man attacked by robbers, thinking he got what was coming to him for traveling alone on the notoriously dangerous road between Jerusalem and Jericho. The audience also would’ve been scandalized that a Samaritan—the most despised outcast they could fathom—is the one to show mercy to the man beaten, robbed, and left for dead. The biblical text tells us that the Samaritan’s heart was “melting” at the sight of this person in need—a man who surely would’ve preferred to die than be helped by a Samaritan. This visceral human connection moves the Samaritan into the ditch, where he himself could’ve been ambushed.

We’ve heard the story of the Good Samaritan so many times that we’ve domesticated the radical demands implied by Jesus’ command to ‘Go and do likewise.’

It’s easy to gloss over these details and ignore the courage required for the Samaritan to go out of his way and into the ditch, the compassion that moves him to alleviate another’s suffering, the generosity involved in healing his wounds and paying for his convalescence at the inn—to say nothing of the boundary-breaking solidarity implied by the characters involved in the story. Jesus shows us that the question that inspires this story (“Who is my neighbor?”) is the wrong question to ask since it implies there is a non-neighbor, someone we are not expected to encounter with dignity and empathy. Jesus returns the question to the lawyer, “Who was neighbor to the robbers’ victim?” Instead of thinking of a neighbor as an object of my duty, Jesus invites us to ask ourselves: What kind of neighbor am I—and to whom? When Jesus concludes this story, his command to “Go and do likewise” does not mean to “Go and do exactly the same,” but serves as an invitation for each person to imagine what it means to apply the Samaritan’s courage, compassion, generosity, and boundary-breaking solidarity by going out of our way and into the ditch, drawing near those who have been rendered invisible, insignificant, and in need. It means doing what we can, no more and no less.

In his formation as a Jesuit priest, Pope Francis’ practice of the Spiritual Exercises of St. Ignatius of Loyola immerses him in Jesus’ teaching and healing ministry, especially in the second week of the exercises. Rather than learning about these stories, St. Ignatius invites us to imaginatively experience being part of the scene in the Gospels. He encourages us to sketch out the “composition of place” to consider the circumstances of the setting and the dispositions of the characters. By considering what it would be like—what we would see and hear, think and feel—to be or behold Bartimaeus, the woman afflicted with hemorrhages for 12 years, or Mary and Martha who witness Jesus raise Lazarus from the dead, we can witness firsthand the surprise, consolation, and liberation of these encounters.

Ignatian spirituality informs Pope Francis’ approach to the story of the Good Samaritan in Fratelli Tutti when he observes,

By putting ourselves in this story, we can reflect on how our encounters have helped or hurt others. We can confront the temptation to repeat the indifference of the priest and Levite who see the man beaten, robbed, and left for dead but cross to the far side of the road to create more distance between themselves and the person in need. Thoughts like “That’s not my problem” or “I already have enough on my plate” can absolve us of this command to draw near to encounter others and share life together.

The story of the Good Samaritan is constantly being repeated. We can see this clearly as social and political inertia is turning many parts of our world into a desolate byway, even as domestic and international disputes and the robbing of opportunities are leaving great numbers of the marginalized stranded on the roadside…Jesus trusts in the best of the human spirit; with this parable, he encourages us to persevere in love, to restore dignity to the suffering and to build a society worthy of the name. (FT, 71)

Creating a “culture of encounter” is the path to restoring human dignity and building relationships that establish a greater sense of respect, safety, and trust. Social change can only happen when people feel welcome, valued, and free to be themselves. For this reason, the pope’s call to build a “culture of encounter” has to lead us from respectful accompaniment and fruitful exchange to the conditions for an inclusive and equitable “culture of belonging.” This means continually inviting people to overcome deception and fear, defensiveness and distrust, contempt and coercion. Such a commitment requires spiritual wisdom and stamina made possible by putting ourselves in touch with God, who is always seeking to encounter us.

To be human is to reach for our destiny: the equality, mutuality, and reciprocity of encounter that realizes inclusive belonging for the flourishing of all.

In this way, Pope Francis’ vision for building a “culture of encounter” requires more than practicing the courage, compassion, generosity, and boundary-breaking solidarity to draw near others and share life together. It also relies on the inner work informed by Ignatian spirituality to reflect on the encounters that changed us: those moments when we felt seen, heard, and valued or the times when we were left to question if we belonged, counted, or mattered. We can be filled with consolation in contemplating the times when we have encountered God in our midst—who often appears to us in the faces of others in need, as Jesus insists in Matthew 25:31-46—and take note of the reasons for desolation caused by hurtful words and actions, or when we felt anxious, alone, or isolated. Learning from our past encounters can help us discern how to be more intentional in encountering others—and making ourselves available to be encountered by others—in the present and future.

In the end, a “culture of encounter” is not just about how to solve problems caused by social division or unjust inequalities. It is also an opportunity to become ever more attentive and responsive to the presence and power of the Triune God, the communion of love in whose image and likeness every person is made. To be human is to reach for our destiny: the equality, mutuality, and reciprocity of encounter that realizes inclusive belonging for the flourishing of all. 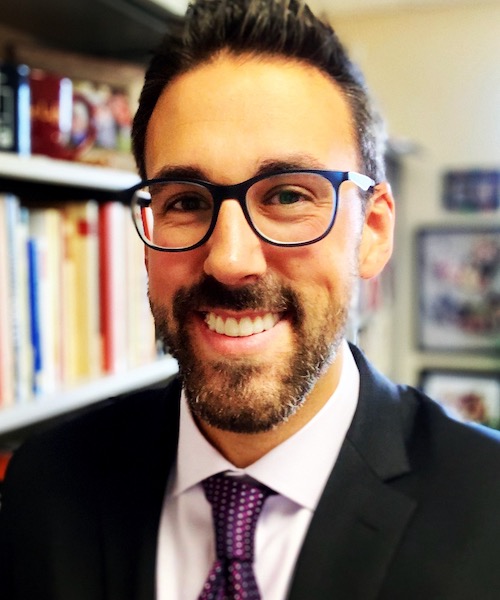 Marcus Mescher is associate professor of Christian ethics at Xavier University in Cincinnati, Ohio. He received his Ph.D. from Boston College, specializing in Catholic social teaching and moral formation. He is the author of dozens of articles in academic and popular venues, as well as two books: The Ethics of Encounter: Christian Neighbor Love as a Practice of Solidarity (2020) and Fratelli Tutti Study Guide (2021).