A thirty-five-year-old man who is about to lose everything gets lost in the dark forest, in the throes of sin and desperation. Will he survive? Will he save his soul from the snares of mortal sin? Will he ever return to his native city of Florence after decades of exile? What is it about Dante’s Divine Comedy that has never ceased to appeal to us today? Perhaps it is that the author is also the protagonist, at a time (the early 1300s) when no one had attempted such a modern and risky narrative approach. Or perhaps it is the combination of Christian epic, classical antiquity, and historical chronicle. It might also be the astonishing power of Dante’s language: the Italian vernacular, not yet recognized as an official language in any court or curia, capable of describing both the pit of hell and the vision God. Or, possibly, it is his ability to represent and flesh out absolute evil and absolute good in terms that go beyond space and time, with a force that endures to this day.

Dante Alighieri’s almost supernatural poetic talent speaks to his readers in such a provocative way that we cannot fail to respond. Dante’s Comedìa, to use the title which the author intended for his poem (Inferno 16.128 and 21.2), is a radically political and politically radical work, and at the same time the most daring of spiritual journeys, a metaphysical adventure fraught with uncanny encounters with historical popes, emperors, former friends and enemies, as well as with frightful monsters from medieval bestiaries and from Greco-Roman mythology. Dante’s powerful depiction of the Christian afterlife, injected with the theological lore of the Church Fathers and late-medieval theological schools, culminates with his celestial ascent to the realm of angels and blessed souls, which includes his guide Beatrice and God himself. It also narrates the exquisite friendship of two poets—one living, Christian, and fighting to save his soul; the other dead, pagan, and doomed to eternal damnation.

Dante Alighieri’s almost supernatural poetic talent speaks to his readers in such a provocative way that we cannot fail to respond.

We are also struck by Dante’s contemporaneity: To cite but one example, the figure of Francesca da Rimini, in the fifth canto of the Inferno, is an exquisite, if tragic, portrait of a woman who was forced into a marriage to which she did not consent, and who pursued her own erotic satisfaction outside of the marital bond. Her affair with her brother-in-law, Paolo, ended in blood at the hand of Gianciotto Malatesta, Francesca’s husband and Paolo’s brother: Francesca stands out not only as the first figure in the Divine Comedy who does not belong to classical antiquity, but also as the first woman with defined psychology and agency in the history of Italian—and possibly European—literature. And had it not been for Dante’s poetic treatment, Francesca da Rimini would have been forgotten by history. Similarly, the pilgrim’s encounter with Ulysses in the twenty-sixth canto of the Inferno left a powerful mark on works by such writers as Alfred, Lord Tennyson, Primo Levi, and James Joyce. Dante cast the Greek hero as the paradigm of the seeker whose hubris and lust for knowledge damn him and his crew for eternity; but, in doing so, the Florentine poet projects the ancient king of Ithaca into the modern world by establishing a direct parallel with Dante himself.

In addition, the imaginative force of the Divine Comedy overpowers all earlier attempts at describing the Christian afterlife. Dante’s depiction of devils and saints was so successful that countless writers and artists have revisited or referenced Dante’s poetry over time: Boccaccio, Milton, Christina Rossetti, T.S. Eliot, to name just a few classic authors of the Western canon; but contemporary writers like Amiri Baraka (Leroi Jones), Kenzaburō Ōe, and Toni Morrison also feel the overwhelming allure of the Florentine poet and draw on his influence in their own works. And, of course, visual artists from Botticelli to Aida Muluneh and Ai Weiwei, and musicians from Franz Liszt to Loreena McKennitt, have touched on Dantean themes.

Perhaps because of his fearless reprehension of vice in popes and emperors, Dante was often seen as a provocative writer, a controversial politician, and a formidable cultural icon.

Perhaps because of his fearless reprehension of vice in popes and emperors, Dante was often seen as a provocative writer, a controversial politician, and a formidable cultural icon. Especially in the early days of its circulation, the Divine Comedy was considered unorthodox and even dangerous by the Catholic Church, and in 1327 Dante’s political treatise On Monarchy was even thrown to the flames by Cardinal and Papal Legate Bertrand du Pouget. The poet and his works soon became so popular that the Holy See refrained from listing the Commedia among the index of forbidden books, instead directing its censorial activity toward banning Dante’s treatise on monarchy, or to “correcting” the heavily theologized lyrical fiction of the New Life. And yet, Dante Alighieri from Florence—fallen aristocrat, unsuccessful politician, exiled poet who lost everything dear—has never enjoyed more popularity than he does now, perhaps precisely because of his disaccord with the powers of his time.

The epic of Dante’s love for Beatrice Portinari, first recounted in the New Life, is fulfilled in the thirtieth canto of the Purgatorio, where the pilgrim reunites with his beloved, 10 years after her death. A joyful vision of the world and of all the good with which God adorned it characterize the conclusion of the poet’s mystical journey. The poetic arch which Dante has pursued since his early lyrics is a meditation on human and divine love, an eager and successful attempt to rescue love poetry from the rigid moralism of Guittone of Arezzo and from the inescapable melancholy of Guido Cavalcanti.

Hope—a theological virtue which Dante celebrates and on which he is quizzed in the twenty-fifth canto of the Paradiso—remains the strongest shield a human being can wield, no matter her or his religious beliefs.

But perhaps the greatest feature of Dante’s oeuvre is its focus on hope. Pope Francis remarked on this aspect in his March 2021 apostolic letter: “At this particular moment in history, overclouded by situations of profound inhumanity and a lack of confidence and prospects for the future, the figure of Dante, prophet of hope and witness to the human desire for happiness, can still provide us with words and examples that encourage us on our journey.” Hope plays a profoundly important role in our own lives today as a remedy to all the hardships and suffering we have endured since the beginning of the COVID-19 pandemic. Many countries have yet to begin the vaccination campaign on which wealthier countries have had a considerable head start. Hope—a theological virtue which Dante celebrates and on which he is quizzed in the twenty-fifth canto of the Paradiso—remains the strongest shield a human being can wield, no matter her or his religious beliefs.

When questioned by Saint James about the source of his hope, Dante answers that it comes from singing the psalms: He coins a new word to convey this mystical and beautiful power of sacred music: teodìa (Paradiso 25.73–35), which is formed from the Greek words for God (θεός) and song (ᾠδή). In the words of Teodolinda Barolini, Dante is the new David, the new “Singer of the Holy Spirit” (Paradiso 20.38), but also, one could add, the poet who created a new space in poetry for love, both human and divine. 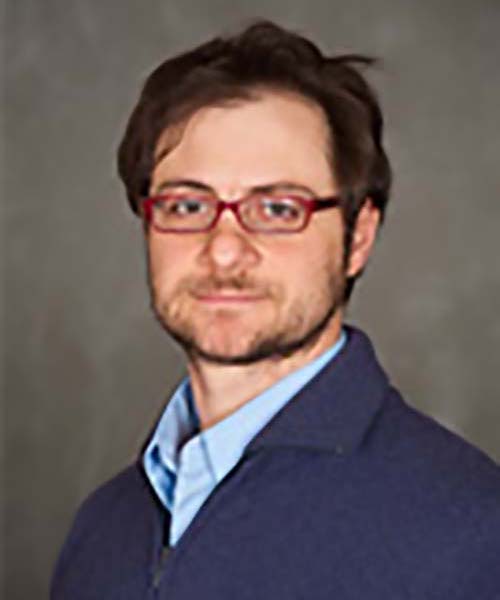 Francesco Ciabattoni is the Term Professor in Italian Literature at Georgetown University and a specialist in medieval Italian literature. His research focuses on Dante and the Middle Ages, the twentieth-century short story, and the interplay of music and literature. Ciabattoni is author of Dante’s Journey to Polyphony (2010) and co-editor of The Decameron Third Day in Perspective (2014). In spring 2021, he taught a class through the Doyle Seminars program, which is supported by the Berkley Center.