Hell on Earth: Parents, Children, and Pain at the Border

Hell on Earth. Worse than Hell. A living Hell. These are the related aphorisms that have been used to capture the extremity of abuses against human rights, from those committed against migrants attempting to enter Europe, to the decrepit conditions of detention facilities all over the world, especially those in impoverished areas of America. Variations on these expressions have been common in describing the experiences of migrants detained at the American border, like so many souls who, fleeing their native “hell[s],” wished to find refuge in a real-life Purgatory, but are diverted back to Dis.

How could one not think of hell when pondering the abuses to children and parents that occurred even before the “zero tolerance” policy announced by Attorney General Jeff Sessions in April 2018? The process of reunification since President Biden declared an end to that policy in January 2021 has not been as swift as would have been hoped. A report from the Department of Homeland Security published in June 2021 has identified approximately 3,900 children who were separated from parents at the border, and 1,700 more cases remain under review.

There are compelling reasons to take literally aphorisms about “hell on earth” when we consider the lasting grief and trauma suffered by migrant families. Dante’s poem, the Divine Comedy, shows us how far these real-life situations exceed the suffering of parents which he imagined in the lowest circles of his vision of hell.

Dante’s poem, the Divine Comedy, shows us how far these real-life situations exceed the suffering of parents which he imagined in the lowest circles of his vision of hell.

In the otherworld depicted in Dante’s poem, young children can only be found in Limbo or the Celestial Rose of the Empyrean: in places of waiting or eternal peace, but never in places that cause suffering. Innocence and lack of ethical responsibility exempt children from punishment. The exclusion of children from the horrors of lower hell occurs linguistically as well: Dante reminds us that describing the base of the universe is “not for a language that cries ‘mommy’ or ‘daddy’” (Inferno 32.9). Hell is not a place for children—just as it was not a place for six-year-old Alison Jimena Valencia Madrid, whose recorded pleas for her mother echoed against the walls of her detention facility, or any of the thousands of children who found themselves there.

Parents experience love for their children as parts of themselves. Aristotle wrote that the basis of all love within the family, philia, derives from a parent’s love for their child, whom they love as “part of themselves” (Nicomachean Ethics, VIII, xii). Dante also believed that philia is an embodied experience. For example, in Paradise, the heavenly souls miss their mothers, fathers, and others in their physical forms, as if those bodies were extensions, or parts, of themselves. In his letter to Cangrande, Dante states that the relationship between father and son is like the relationship between the whole and its parts.

If love for those we hold dear is an embodied experience, then the parting of those bound by love is akin to dismemberment, the division of a physical whole. Dante visually renders this separation in the punishment of Bertran de Born, a soul found amongst the schismatics, for having caused division between the sons of King Henry II and their father. Bertran holds his own head separate from his body, since he divided father and son.

If love for those we hold dear is an embodied experience, then the parting of those bound by love is akin to dismemberment, the division of a physical whole.

Some of the most poignant moments of grief in Dante’s hell are those expressed by parents, such as Cavalcante de’ Cavalcanti, as they reflect upon their children from whom they have been separated by death. The heretic Cavalcante, who is unaware of his son’s fate, as well as the treacherous Ugolino, imprisoned with his two children and two grandchildren, constitute some of the most poignant moments of grief in the poem, moments that speak to this plural sense of temporal suffering, and what we have been witnessing at the border. The anguish of parents separated from their children comes from being at odds with time, looking to an uncertain future while remembering the past, while the life of your child hangs in the balance of an unknown present.

Dante illustrates this dilemma in the sixth circle, where the pilgrim talks about the history of Florentine conflict with the imposing Farinata degli Uberti, a Ghibelline who stood on the side of empire and who clashed with Dante’s ancestors during the mid-thirteenth century. Interrupting their conversation about the history of exiled relatives, another soul, Cavalcante de’ Cavalcanti, lifts his head out of the same tomb to inquire why his son, Dante’s fellow poet, Guido, does not join him on this infernal journey in the present. It crushes the father’s spirits, causing him to recoil back into his tomb in despair:

Then suddenly erect, he cried: “What’s that:
He ‘did disdain’? He is not still alive?
The sweet light does not strike against his eyes?”
(Inferno 10.67–69)

Dante wishes to tell Cavalcante that though his son is not there with them, he is still part of the present and conjoined with others. It is a response to the anxieties of a parent in detention, waiting to know the fate of their children, where they are and in whose care, and whether they will be reunited or be separated for all of eternity.

Cavalcante’s paternal love and anguish clashes with the case of another sinner and father, Ugolino della Gherardesca, who is frozen in lake Cocytus amongst the treacherous of the Ninth Circle. Toward the end of his life, he was scapegoated by his companion in hell, the Archbishop Ruggieri, whose head he chews for eternity. Ruggieri’s manipulation of public opinion led to Ugolino’s imprisonment in the Eagle Tower with his two children and two grandsons. As they begin to die from starvation, the children offer to be eaten by their patriarch—like parts to complete a whole, as if to mend Ugolino’s body.

Dante’s poem tells us that hell is anywhere where parents and children suffer.

Children should not be subjected to their parents’ political fate; as Dante writes, even if Ugolino betrayed his city, this was no reason to have his children suffer. Ugolino’s story thus is not the story of the migrant: that of a parent who would sacrifice his own life for a better life for his children. The story of Ugolino is the allegory of division and destruction in the household and the state by the narcissism of leaders. It is the consumption and erasure of future generations born into a conflict which was bred by those in power.

Dante’s poem tells us that hell is anywhere where parents and children suffer. More than midway along their journey through hell, Vergil teaches Dante the pilgrim that we should not pity the guilty, for to do so would be to question divine justice (Inferno 20.28–30). Dante’s poem shows us the human price of the opposite action: how pity and compassion are truly dead when we punish the innocent. 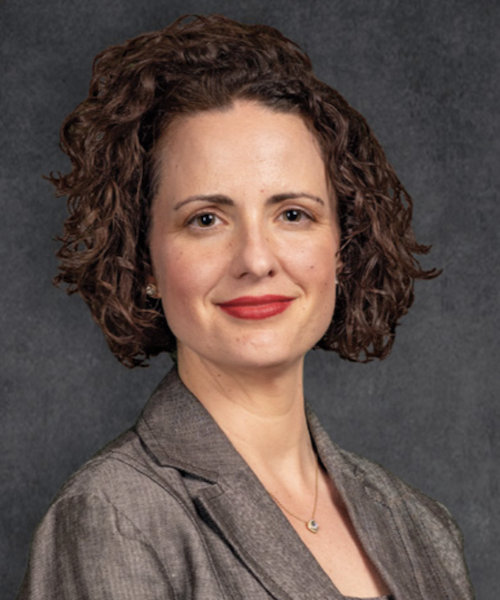 Kristina Olson is associate professor of Italian in the Department of Modern and Classical Languages at George Mason University. She is the author of Courtesy Lost: Dante, Boccaccio and the Literature of History (2014) and several articles on Dante, Boccaccio, and Petrarch. Olson is also president of the American Boccaccio Association (2020–2023).