The Divine Comedy is perhaps the most engaging religious poem ever written, based on doctrines still a part of Catholicism today, but it is also the result of a profoundly human vision of the world communicated through a fictional rendition of a single individual’s experience. It is a vast allegory of education founded upon one man’s journey toward salvation. It connects the personal history of that single individual with the universal history of humanity, while at the same time presenting the journey of one man as an example for all humans, as an exodus and journey through the wilderness to the promised land. It is an archetypical story about the potential for individual and communal transformation. Pope Francis, in his recent apostolic letter, Candor lucis aeternae, recognizes various ways in which the poem still opens itself up to believers and non-believers alike as a testament to the human desire for happiness and to the hope in future redemption.

Although often taken for granted, it is important to ask the question of how such a poem, written over 700 years ago, can still speak to us today. The answer is not self-evident. The Divine Comedy is full of references to now obscure historical personages and events and to seemingly impenetrable philosophical discourses to which it is hard for many modern readers to relate. It is truly astonishing that the poem enjoys such a wide popularity today outside of the small group of academics who have dedicated their careers to understanding its minutiae.

The continued success of the poem is also, even primarily, the result of the masterful way that Dante represents individual life and human history.

To some extent, its resonance today could be explained by its historical importance for Italian and world literature. For Christian readers especially, its importance is also linked to the spiritual experience of the poem that Pope Francis describes. This cannot be all, in my view, that makes the poem so powerful. If this were all there was to it, then medieval religious literature would be far more popular than it is. The continued success of the poem is also, even primarily, the result of the masterful way that Dante represents individual life and human history.

Pope Francis invites us to consider the spiritual relevance of the Divine Comedy to our contemporary world in terms of the journey that makes up the poem:

Dante, pondering his life of exile, radical uncertainty, fragility, and constant moving from place to place, sublimated and transformed his personal experience, making it a paradigm of the human condition, viewed as a journey – spiritual and physical – that continues until it reaches its goal.

More than a simple vision of God or otherworldly narrative, the poem transforms Dante’s reality and gives it meaning, offering itself to readers so that they may do the same. The distinctly literary process of “sublimation and transformation” through the imagination that the poem enacts on Dante’s personal experience of the world provides the world with an order that Dante did not experience in life, but in which he held a deep faith. As readers of his poem, we are bound by a pact of faith to the fiction that he creates.

This process is motivated by Dante’s faith in that order that he sometimes could not see and his hope in a future that he could not know. In life, Dante would not achieve the transcendent self-realization and transformation that his character enacts in his poem. He was not a visionary or a hero: “I am not Aeneas, nor am I Paul” (Inferno 2.32). He was a poet and a storyteller. As a man, he was hardly to be taken as a model. By fictionalizing his experience and representing it figuratively, however, Dante was able to imagine his life otherwise, from the outside as a stranger looking in, so that perhaps he could become that other self. And, through his fiction, readers are invited to do the same.

The Divine Comedy opens with the depiction of a hopeless man in profound crisis:

Halfway through our life’s journey
I found myself in a dark forest,
Having strayed from the direct path. (Inferno 1.1–3)

This man both is and is not the historical Dante. He is a poetic figure of an individual who is also more than that individual. In his portrayal of himself, Dante omits biographical details and provides a figurative representation of his actual state. Lost in a forest, he is deprived of the light of the heavens, and he is terrified by what lurks in a darkness that is spiritual, psychological, and historical. In the opening lines of the poem, the we and the I converge, and we are offered the opportunity to identify with this man on multiple levels. And we don’t need to know his life story to do so.

As soon as Dante represents this state of loss and confusion, he provides the reader with an anticipation of the journey ahead and its goal. As the man is stranded in the chaotic labyrinth of history and of his own mind, he is rescued by the spirit of the Roman poet Virgil, sent from on high to lead him on a journey to encounter the source of the grace that saved him. As the scene of the dark wood sublimates Dante’s individual story into that of humanity, so the encounter with Virgil amplifies the importance of the Roman poet’s work for the historical Dante into a figure for the transformative power of literature. We are led to understand that grace can manifest itself through literature if the reader is so inclined to find it there.

The poem goes on to recount the journey of this man who is and is not Dante, as he confronts the shortcomings of his will and intellect through a series of encounters with historical individuals as he re-imagines them. He bears witness to the divine order that underlies the world of history, hidden from him in the dark wood, and rediscovers himself as an integral part of God’s creation. As a poet, Dante could only do this through a kind of fiction—“that truth that has the face of a lie” (Inferno 16.124)—that self-consciously transforms the details of historical and individual reality into universal figures.

The poem’s vision of the cosmos transcends both the reality of its creator and that of its readers, so that the character and his journey might become us and our journey.

The unique relationship between reality and fiction across Dante’s poem is what gives it the potential to become a paradigm for human experience. By noticing the difference between Dante as a historical individual and his fictionalized counterpart in the poem, the universalizing paradigm that the poet sets before us becomes clearer. The poem’s vision of the cosmos transcends both the reality of its creator and that of its readers, so that the character and his journey might become us and our journey. 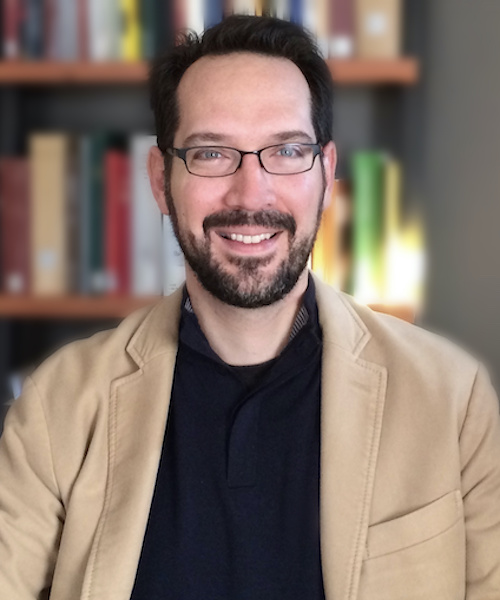 David G. Lummus is assistant professor of Italian at the University of Notre Dame. His research deals primarily with poetics and with politics and literature in the works of Giovanni Boccaccio, Dante Alighieri, and Francesco Petrarca. He is the author of The City of Poetry: Imagining the Civic Role of the Poet in Fourteenth-Century Italy (2020).