Going Home: A Time for Introspection and Reflection

More than a billion people are now locked inside their houses worldwide, an unprecedented event in history. This, as everyone is realizing is an all-out war, but a war with whom? Who is the enemy here? Everyone seems to be searching for one. Who do we blame? And for what? For many it is the old enemy, the Other, the demon out there. The “we always told you so” guy. For Americans the Chinese, for Indian Hindus, it is the Muslims; for many others it is the immigrants, the poor, and the marginal, who huddle like animals in their hovels and spread disease.

But for many it is also the enemy within. In Delhi, in India, about a week into the lockdown, people have begun to realize that they are waking up to a bright blue sky, not seen for years. The air quality has shown significant improvement in what used to be one of the most polluted cities in the world. Then again, there is practically no crime, no rape and no incidences of molestations. There were thousands of victims of road accidents in a country over crowded with people and vehicles on the road. All of a sudden everything is calm, clean, and pure. The birds are singing, the butterflies are fluttering, and the trees are blooming with flowers. People sitting at home have suddenly found a new hobby. Everyone is posting nature photos capturing the blue skies, the colorful trees, and the serene river that has regained its lost beauty. People have woken up to the fact that it is they who are the worst enemies of themselves and their home, this earth. Home has suddenly become the best place to be in. Home symbolizes the earth and it also symbolizes belongingness to one’s family and one’s space.

The coronavirus has bound all people on this globe into one entity. The virus is impervious to all divisions and distinctions making us realize that all humanity transcending color, shape, size, language, culture, and religion is unified before this common threat. Geopolitical boundaries are meaningless in front of this silent, invisible enemy. The realization is dawning for many that this planet is home to our species and its only home. Anthropogenic activities are now showing up as the greatest threat to this home. The pandemic is also shifting the focus to humanity instead of the superhuman. At a time when all religious places have closed their doors, the only place where one can go is to one’s family and alternatively to the hospital. Religion is coming back inside—into one’s mind, heart, and home.

All religions that have originated on the soil of South Asia—Hinduism, Jainism, Buddhism, and Sikhism—have a philosophy where death is not the end, it is only a transition. The body has been compared to old clothes that one discards and puts on new. The soul is the consciousness that goes from one mortal existence to another. Having faith in viewing death as a transition, people on this sub-continent usually show a great deal of equanimity in the face of any disaster. The discourses around the coronavirus that focus primarily on the body are antithetical to a philosophical understanding about death, the afterworld, and especially about the nature of being human. For this reason, people here are still ready to celebrate, to clap, to light lamps, and blow conch shells when the Prime Minister Narendra Modi asked everyone to come together in solidarity. Transcending the individual and celebrating the community is the greatest mantra of well-being in India.

For people who cannot imagine life beyond family, neighbors, and community, social distancing appears to be the worst possible punishment. In many places like in the slums and shanty towns, it is near impossible. Yet the virus is slow to spread in India. Part of it could be the attitude of acceptance and resignation. As it is, most families do not always go out, women especially mostly stay at home. Home is a place of work for millions of persons in the informal sector. Those used to going to office and working from home have found hobbies such as music, photography, and exercise. There is a culture of saving and sharing that is also allowing many to tide over during the difficult days. Close community and family ties leave few alone to fend for themselves. This is not to say that there is no suffering, and once the economy goes down, the suffering will increase.

The worst hit, the poorest of the poor, have one great desire. They wish to go home. Home, in terms of the place where they feel they belong. For most poor migrants from rural to urban areas, it is the village from where they came, where they were born. Although they are being assured of monetary help, food, and shelter, they are not convinced. They all feel they would like to die “at home” rather than in a depersonalized urban setting where they had only come to earn a living, a place where they never belonged. Belongingness, family, and one’s identity is symbolized in the soil, air, and water of one’s place of birth. Most Indians, irrespective of class, education, and status, always desire that ultimate homecoming. In face of a major disaster, this emotion is surfacing most poignantly. This is the same emotion due to which government offices in India grant all employees a hometown leave and travel grant. This is the emotion that brings plane-loads of Indian from across the world home for festivals and weddings. At the time of impending doom, millions of Indians wish to “go home” once again. 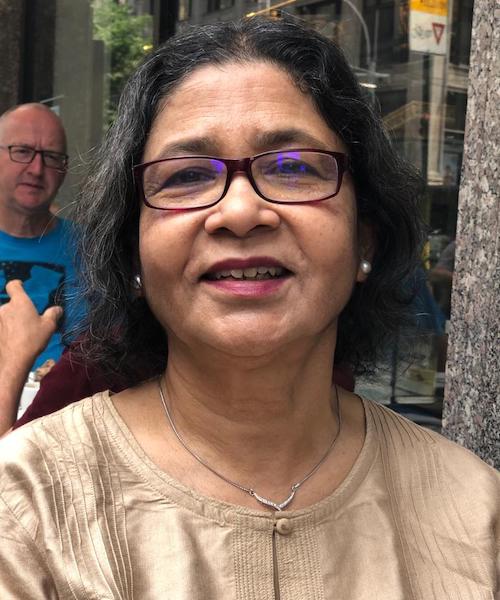 Subhadra Channa is a professor emerita of anthropology at the University of Delhi. Her recent books include Gender in South Asia (Cambridge) and The Inner and Outer Selves: Cosmology, Gender, and Ecology in the Himalayas (Oxford), as well as the co-edited volume Life as a Dalit (Sage).