Martha Conant on a Survivor's Spirituality

On July 19, 1989, Martha Conant boarded United Airlines Flight 232, which crash-landed at Sioux City, Iowa, killing 111 of its 296 passengers. Martha Conant was one of the survivors. In this conversation, she discusses with her daughter-in-law Brittany Conant her experience in the crash and how it affected her spirituality.

This story is a part of the American Pilgrimage Project, a conversation series that invites Americans of diverse backgrounds to sit together and talk to each other one-to-one about the role their religious beliefs play at crucial moments in their lives. The interview was recorded and produced by StoryCorps, a national nonprofit whose mission is to preserve and share humanity’s stories in order to build connections between people and create a more just and compassionate world. 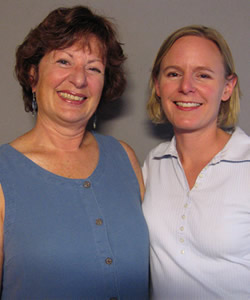 Martha: There was a jerk. The airplane really lurched. And the pilot said, "We've lost an engine. No problem. DC10s can fly perfectly well on two engines, sorry for the disturbance. I hope you enjoy the rest of your lunch." The flight attendants were picking up the dishes and one member of the flight crew came back to look out the window at the wings, but he was calm. He was talking to people. So there was confidence that this was just a hitch that we were going to be fine. It was 40 minutes from the time that the plane lurched until we, I'm going to say landed, rather than crashed, because we were intending to land. And I remember the pilot told us over the PA that it's going to be the roughest landing you've ever experienced, and he yelled, "Brace. Brace. Brace."

The next thing was a huge influx of air and debris and my body was being bounced around so much I was out of control. I lost consciousness. And when I came to, I remember saying to myself, "Oh, I'm still alive." Then the motion stopped. Then the plane was still.

Brittany: Do you think that there is a reason that you survived unharmed?

Martha: Well, I have asked myself that question so many times. When survivors were being fed and cared for, I ended up talking to a young man who was a social worker and he said, "God must have had a reason for saving you. You haven't finished your life's work yet." And I was quite troubled. It felt like I was saddled with a lot of responsibility then to figure out what is this work I'm supposed to be doing? And then the flip side is God didn't have any more work for all those other people and I don't believe that.

I decided to live with as few regrets as possible, not leaving home in the morning being upset with someone, not passing up a chance to tell my husband or one of the boys how much I love him. It was hard to do that because it wasn't the habit. But whenever I thought, "Oh, this is hard." Then I'd think, "Well, I might not be coming home tonight. It's not that hard." That event was like being picked up by the scruff of the neck and shaken. And God says, "This is your only life. Just be grateful that you've got these days and these hours and these wonderful people in your life. Just be grateful for that." And one of the things that has followed me, surrounded me, wrapped me, I think, is that feeling of gratitude.